Suzanne Lynch: Europe is looking at Ireland and does not like what it sees 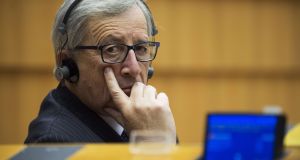 EU Commission chief Jean-Claude Juncker. While technically the union can trundle on and is not obliged to respond to the vagaries of general elections, the anti-establishment vote is, in part, an expression of frustration at EU as well as national elites. AFP PHOTO / JOHN THYSJOHN THYS/AFP/Getty Images

In October last year, Enda Kenny took to the stage at the European People’s Party congress in Madrid and told the tale of Ireland’s return to economic sovereignty.

The reason for the Taoiseach’s guest appearance as keynote speaker was clear: six weeks out from a general election, Spain’s ruling Partido Popular was eager to highlight an example of how a responsible centre-right government had secured economic stability. Kenny duly delivered.

Describing how the troika arrived in a “bloodless coup”, he outlined the Government’s budgetary decisions made during the crisis. As he referred to developments in Greece, Kenny emphasised the importance of political stability to ensure economic stability. “Populism is a danger to all democracies” he told Europe’s assembled centre-right politicians.

Four months later, four of the centre-right prime ministers at the congress are no longer in power. Ewa Kopacz (Poland), Mariano Rajoy (Spain), Pedro Passos Coelho (Portugal) and, for the moment, Enda Kenny have all been rejected by their electorates in recent general elections.

Ireland has become the latest bailout country to reject the incumbent government in the electorate’s search for a political alternative. Though few officials will comment on the record, the Irish election results are a serious blow to the European Union.

More specifically, the results are a political indictment of the euro zone’s bailout project. Of the five euro zone countries to receive EU-IMF bailouts during the financial crisis, four have seen voters reject the governing parties.

Spain, which received a €40 billion bank bailout in 2012, is still without a government 10 weeks after an election that saw liberal party Ciudadanos and anti-austerity Podemos make strong gains.

As the dust settles on the Irish election, and another bailout government bites the dust, the message for EU institutions is deeply unsettling.

The EU, the IMF and the European Central Bank ultimately succeeded in pushing through tough bailout programmes in the euro zone’s most exposed economies and averted economic catastrophe in the immediate term. But the implementation of bailout programmes has had profound political consequences.

One of the injustices of the EU’s political system is that the very bodies responsible for the bailout programmes are shielded from popular backlash due to their status as unelected institutions.

Instead, domestic parties, many of whom had no choice but to implement measures demanded by institutions such as the European Commission and ECB, have borne the brunt of voter apathy.

The only opportunity EU citizens have to deliver their views on European politicians at the ballot box is with the European Parliament elections. held every five years. These elections have seen an increase in support for anti-EU parties. The definitive feature of the May 2014 elections was the strong performance of eurosceptic parties from the right and left, with France’s National Front, the UK Independence Party and the Danish People’s Party topping the polls.

It is a further irony that the parliament, the EU’s only directly elected institution, is in fact the least powerful of all EU institutions. In reality, despite being directly elected by the EU’s 500 million citizens, MEPs exercise limited impact on the design of the bailout programmes or on the stringent debt and deficit rules devised by the European Commission.

For sure, the general election results in Ireland and other euro zone countries are undoubtedly a judgment on the bailout programmes. But the Irish result is also in sync with a broader development across the EU: the breakdown of the traditional two-party system.

Despite speculation that Ireland is now catching up with continental politics, the minority governments in northern Europe and Austria are still relatively rare, and Germany and Austria’s “grand coalitions” are the exception rather than the rule. Rather, politics in countries such as France, Britain, Spain, Greece, Italy and Poland have long been dominated by big duopolies: conservative-Labour in Britain, Parti Socialiste-UMP in France, Partido Popular and the socialist party in Spain.

The challenge to their hegemony has been one of the main political trends in the last few years.

Indeed, defenders of the EU would argue that the rise of alternative politics is not a Europe-specific trend. They would point out that anti-establishment sentiment is evident in the United States, where Republican presidential candidate Donald Trump is riding high in election polls.

Some would even argue that the fact that the electorate in the four bailout countries (Greece, Spain, Portugal and Ireland) have, in a broad sense, shifted to the left rather than to the far right is a good thing. Better to have Podemos than Le Pen, say many in Brussels, more concerned with the shift to the right in Poland and Hungary.

Nonetheless, the EU can ill-afford to ignore the message of national electorates. While technically the union can trundle on and is not obliged to respond to the vagaries of general elections, the anti-establishment vote is, in part, an expression of frustration at EU as well as national elites.

As the EU faces unprecedented challenges, including a British referendum on membership and a deepening refugee crisis, it needs to maintain the trust of its citizens. It needs to ensure the European project does not lose sight of the European people.

1 Gardaí believe men in Cork murder-suicide chose to let woman survive
2 ‘In Crete I pay 70% less than I paid for a shoebox apartment in Dublin’s docklands’
3 Supermarkets compared: How Dunnes, Lidl, Tesco and M&S measure up
4 WHO raises alarm over widespread and enduring damage of Long Covid
5 Ireland ‘outperforming almost all European countries in controlling spread of Covid-19’
Real news has value SUBSCRIBE