Storm clouds over Stormont: Electoral competition has had a destabilising effect

Martin Mansergh: The IRA may not have been defeated, though they were certainly held in check 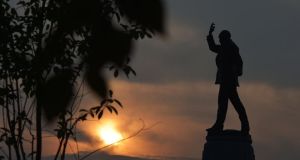 Above, Sir Edward Carson’s statue can be seen as the sun sets at Stormont. Photograph: Charles McQuillan/Getty Images

Even though the Northern Ireland Executive and other institutions of the Belfast Agreement have been running uninterrupted for over eight years from May 2007 till now, Northern Ireland still struggles as a cohesive political entity. However, there is little alternative.

There is no point at this stage in begrudging the existence of Northern Ireland.

While direct rule administered by Britain with inputs from the Irish Government is the default option, one constant of British policy since the old Stormont was abolished in 1972 has been a determination to keep in place a devolved government at arm’s length.

A fall of the Executive might or might not lead to a long hiatus, but one can be certain that strenuous efforts will be made by both governments to shore it up, even though it hangs by a thread, or, failing that, to try and reinstate it after elections.

While the McGuigan murder was the catalyst that precipitated the present crisis, there has been an impasse for some time in the affairs of the Executive, which has led to growing public indifference to its fate.

It was once thought that normality would be achieved, when the Northern parties were arguing about economic and social issues, instead of constitutional ones, but that is no longer obvious.

We are partly paying the price of few-holds-barred electoral competition amongst all parties North and South, which has had an inevitable destabilising effect.

In 1998, at the time of the Belfast Agreement, it was clear that the Ulster Unionist Party under David Trimble and the SDLP at Stormont under its Deputy Leader, Seamus Mallon, would head up the Executive.

Nobody envisaged that in less than 10 years Ian Paisley then Peter Robinson as First Minister would work in harness with Martin McGuinness as Deputy First Minister.

Yet these things came to pass, and all main parties have been willing to work within the framework of the Belfast Agreement or its successors.

In the past, the two lead parties, the DUP and Sinn Féin, would not have been seen as great practitioners of peace, reconciliation and compromise.

They were voted for by their respective communities as the toughest available political champions, who would drive the hardest bargains.

Both brought with them a lot of baggage, albeit of a different kind.

The DUP distinguished itself for 30 years by trenchantly opposing reform, compromise and political initiatives that might advance peace, until in 2003 they won the leadership of unionism.

This makes them vulnerable to the kind of opposition they practised for so long.

Yet, having parties in opposition on each side could be a healthy development, bringing with it some prospect of alternance.

Sinn Féin was for a long time the political front of the IRA, which was the prime mover in a conflict costing some 3,700 lives over the very existence of Northern Ireland.

While the embers are not yet cold, a political breakdown is unwelcome. Sinn Féin’s expressed condemnation of violence and terrorism, its expressed commitment to democracy, and its expressed support for the police are quite unequivocal.

Their problem is an inability to control every former volunteer, a few of whom might be tempted to take the law in their own hands again.

Even if there is no longer a military command or other structure, the IRA, in the public mind, have not entirely gone away, if two of their former members can be gunned down in a feud without any plausible alternative explanation.

Also, any who use their former status for purposes of lucrative criminality do not fit the picture.

There is real point in having a devolved government in Northern Ireland, provided there is a will by the parties to go beyond jockeying for position and make it work.

Even within the limitations of devolution, there is plentiful scope for initiatives that will better the lives of people there.

A degree of confidence in stability and good governance would go a long way to making the Northern Ireland economy more dynamic, particularly if its corporation tax is aligned with the Republic’s.

Coalition has to be more than a mutual blocking mechanism, with progress being made by agreeing trade-offs, which will help satisfy aspirations in both communities.

Budgetary and macroeconomic policy is determined in Britain. No fault lies in acknowledging that reality. Anti-austerity campaigns are unlikely to be won at Stormont.

Taking on the responsibilities of government, North or South, involves being ready to stand over difficult choices and decisions.

In the long term, a party that seeks a united Ireland surely has an interest in reducing Northern Ireland’s dependence on a large British subvention.

The difficulty of replacing this remains one major obstacle among others to persuading people of the advantages of Irish unity.

The IRA may not have been defeated, though they were certainly held in check.

Notwithstanding the mixed causes, motivations and results of the conflict, and without denying the substantial responsibility of others for it, most people view the post-1969 IRA campaign as well as some of the responses to it as a major mistake, from which it may take a long time to recover.

Putting that whole period behind us, clearing up the legacy, and stepping more confidently on a different path to the future involves courage and co-operation in taking risks.

There is still a lot of confidence-building to be done.

Martin Mansergh is a former Northern Ireland adviser to the taoiseach and TD.

1 Operator rejects claims by Dr Tony Holohan that car parks are full
2 Irish designer of Oxford vaccine: ‘I’ve never worked so hard in my life’
3 Holohan calls for end to victim-blaming on breaches of public health guidelines
4 Somebody needs to explain sovereignty to Johnson before it is too late
5 BOI customers to be charged twice with bank fees on New Year’s Eve
Real news has value SUBSCRIBE