Sinn Féin can no longer claim ownership of Irish unity 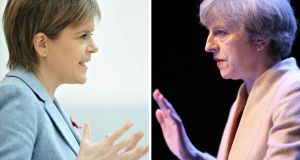 Scottish first minister Nicola Sturgeon (left) and British prime minister Theresa May: the Scottish National Party case for staying in the single market and customs union were dismissed by May. Photograph: PA Wire

That we live in an age of acceleration has become common in contemporary debate. It applies in technology, society and in politics. Globalisation and its discontents have reinforced the trend over the last year with Brexit, Trump and the new populisms. We have just witnessed a week of high acceleration in British politics concerning Scotland, Brexit and the future of the UK.

The epigram attributed to Lenin, that “there are decades when nothing happens and there are weeks when decades happen”, is apposite in this 10th anniversary of the Russian revolution, which he was referring to when he said that. His conclusion that being prepared for rapid change is essential for revolutionaries is more widely applicable. When confronted by accelerating events that impact you, it is prudent to anticipate possible directions of change and how best to respond.

That is the context in which a united Ireland has once again come onto the political agenda here. The subject has usually been discussed in North-South terms and, as chronicled in this newspaper’s series during the week, often in a setting of southern indifference and northern intransigence to it.

The Belfast Agreement, by enshrining the principle of concurrent consent in both jurisdictions, together with the sense that it provides a necessary opportunity for reconciliation within Northern Ireland and between the two States before border polls would be invoked, contributed to a mutual spirit of gradualness.

That spirit has been rudely interrupted by the Brexit vote in the UK. It is further exacerbated by the Conservative government’s radical decision under Theresa May to interpret the 52-48 per cent vote as one to leave the European Union’s single market and customs union rather than to remain within them from outside the EU’s political structures.

Immigration is thereby privileged over the UK’s 50 per cent exports to the EU. Her decision assumes a privileged bespoke deal will be possible to protect that trade while pursuing new links with the Anglosphere and Commonwealth with a mere 20 per cent export share. Not for nothing do sceptical civil servants in Westminster refer to this as “Empire 2.0”.

Alongside the imperial nostalgia comes a recentralised assertion of Westminster sovereignty within the UK. Given that the Brexit victory was an English majority and, taking account of the reawakened English nationalism animating Conservative dominance over a weakened Labour Party, it is not surprising that Scotland should bridle at these trends. May’s promised consultations with the devolved authorities stopped well short of direct influence on policy-making, a point she drove home in her recent Edinburgh speech. The Scottish National Party case for staying in the single market and customs union, and for securing control over agriculture and fisheries after Brexit, were dismissed.

Such high-handedness contradicts the broader pluralism of the UK’s post-war union state, cemented by the Welfare State from 1945. It cuts across the asymmetric federalisation of the UK implied by devolution under Tony Blair’s Labour government from 1998; that process has never been properly inscribed constitutionally, is smothered in the Brexit discourse and is no longer heard from Labour. So the UK faces a dual sovereignty crisis in which its ever looser internal union is matched now by its rejection of the EU’s ever closer one.

Nicola Sturgeon’s call for a second referendum on independence this week crystallises that crisis and heralds a possible UK break-up. Her party’s rise to power and overwhelming dominance of Scottish politics has stimulated associated calls for Irish unification. These events sharply pose the question: is England still willing to pay the political and economic cost of union with the smaller and more expensive Scotland, Northern Ireland and Wales?

This east-west dynamic in the UK’s dual crisis poses new questions for Ireland. They arise from structural change in the Irish-British relationship driven from the UK and not from Irish nationalism’s traditional claims for unification. Sinn Féin can no longer claim ownership of the unity issue as the debate broadens out.

It is prudent and urgent to tackle these questions in an exploratory and analytical way. The Brexit effects on Ireland North and South are one channel, asking how can the border be kept open for people and goods. Dublin will give voice to Irish interests in the negotiations and needs to canvass them sensitively and imaginatively.

The accelerating east-west pressure opens up space for an equally sympathetic and deliberative debate on Irish constitutional change and on the shape of a potentially united Ireland.