Praise for Ireland says more about the state of Britain

Finn McRedmond: Articles in The Economist and Guardian show our neighbour’s identity crisis 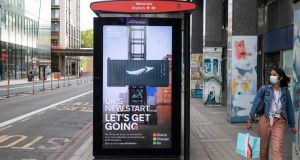 ‘While Brexit has cast a looming shadow, coronavirus seems to be the ultimate catalyst driving Britain to this crisis of self-conception.’ Photograph: Simon Dawson/Bloomberg

It’s a rare treat for Ireland to receive protracted – and positive – prominence in the UK press. For years now attacks on “little Ireland’s” “ridiculous leaders”, and its Government’s “suicidal” failures of statesmanship have dominated the right-wing headlines.

But there has been nothing short of a seismic tonal shift the past week: Ireland’s soft power and diplomatic strength is in vogue, as a widely circulated Economist op-ed and Guardian editorial redressed the coverage imbalance.

While the Economist cited Ireland’s “cultural clout”, lack of “imperial baggage” and political “dexterity” as reasons for its newfound status as a “tiny diplomatic superpower”, a Guardian editorial toasted to its “immense” influence in Brussels and “wiser” Covid-19 response, before deftly signing off with a reworked quote from WB Yeats, declaring “an enviable beauty is born”.

Both were certainly flattering to this so-called tiny superpower’s ego. After years of Brexit-induced anathema between the two nations – with both sides of the Irish Sea quick to indulge in lazy pastiches of the other – relations hit a nadir. Recognition, then, from the UK of Ireland as its own nation with its own interests and its own voice on the international stage was long overdue, but welcome all the same. It is perhaps worth asking, however, why now?

There is the obvious answer: a spate of recent high-profile diplomatic success stories have driven Ireland up the news agenda. Phil Hogan’s elevation to the coveted position of trade commissioner in the EU, Ireland’s victory in securing a seat on the UN Security Council, and Paschal Donohue’s successful bid to become president of the Eurogroup, all point towards a small nation punching above its weight in diplomatic terms. The recent election and government formation negotiations probably helped too.

But explaining away Ireland as the topic du jour for these reasons alone misses something more foundational: the United Kingdom is enduring something of an identity crisis. One that has been thrown into sharp relief by – though set in motion long before – Brexit. And one that has been catalysed by the crisis of coronavirus and the increasingly uncertain future of the union.

Riven by internecine warfare over its rightful place in the world – is it European? Does it fit better with America? What about the Commonwealth? Is it globalist or does it want to shutter its doors to its European neighbours? – and helmed by a beleaguered prime minister deprived of vision, Britain is looking at its oldest and closest neighbour as it embarks on a path far removed from its own.

This crisis of self is not defined, nor is it caused, by Britain’s long and thorny relationship with Ireland. But Ireland’s increasing psychological distance from its former master is symbolic of the stasis that has taken hold.

Brexit – though far from resolved – revealed the full scale of the argument Britain has been having with itself. It left the nation utterly divided and still without reconciliation. That the UK was never entirely comfortable with its European Union membership – failing to embrace a Europeanised shift in power that amplified the voices of Ireland and other smaller nations – is a long observed fact. But that it is unsure about what Brexit Britain really means is equally true: is it about free trade? A means of border control? Is its value in creating a low-tax, low regulation zone? Or is it akin to Jacob Rees-Mogg’s lofty gestures to Britannia unchained?

Despite going through a process of self-interrogation, Great Britain is still deserving of its 'great' moniker

The depth and scale of this discomfort are no more patent in the symbols it created to illustrate its divorce from the bloc, and what was supposed to be the UK’s dawning golden age: a newly-minted Brexit coin; Johnson’s facetious union bridge from Scotland to Northern Ireland; Big Ben’s bongs on Brexit eve. Hardly the tricolour of the French republic; rather paltry totems of an utterly confused revolution.

But while Brexit has cast a looming shadow, coronavirus seems to be the ultimate catalyst driving Britain to this crisis of self-conception; seeing Ireland take its cues not from London, as once was the norm, but rather from the World Health Organisation and the European Union. It took the pandemic to reveal something that has long been obvious, but long ignored: Ireland is now more European than it is British.

Though Ireland should be wary of hubris: it has a litany of problems and faces impending storms over taxation reform, an economic crisis heralded by coronavirus, and a new Government that has yet to instil confidence. And despite going through a process of self-interrogation, Great Britain is still deserving of its “great” moniker. The reinvigoration of the Labour Party under Keir Starmer, and the heroic efforts of Chancellor Rishi Sunak are enough to restore faith. Nor should we gloss over Oxford University’s promising steps towards a vaccine.

But gestures from the British press now towards Ireland’s “enviable” political culture and diplomatic prowess are evidence of a country going through a psychological process that Ireland has been going through for years: Britain’s global primacy is a feature of ancient history, and thanks to the European Union, Ireland’s future is no longer tied to its oldest and closest neighbour. Rather both nations are charting their own course, bound by shared culture and history but distinct in direction of travel.

1 Covid-19 nonsense peddled by celebrities needs to be challenged
2 How a ship abandoned by its owner brought deadly cargo to Beirut
3 Caroline Flack died by suicide after learning of prosecution, inquest finds
4 Production at Brady’s Ham plant in Kildare stops after 80 staff test positive for Covid-19
5 Scientists uncover biological signatures of the worst Covid-19 cases
Real news has value SUBSCRIBE