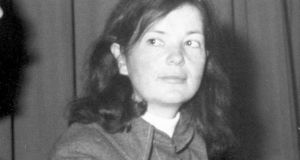 In the Seanad in 1974, Mary Robinson tackled the personal and legal limbo of children born out of wedlock

More than four decades – shamefully – now separate us from the initial, courageous effort made by Mary Robinson and others to spotlight and remedy the malign effects of our legislative and social provision for children born out of wedlock. Mary and I were both in the Seanad then, both of us Independents (I was simultaneously an employee of this newspaper!), and each representing one of the two university constituencies. A coalition government of Fine Gael and Labour was in power for the first time in 16 years, and Mary’s courageous agenda had – or so we thought – a fresh chance of gaining public attention and political traction.

So, in 1974, Mary tackled the issue of illegitimacy in a campaign which was not primarily about the institutional treatment of children born out of wedlock (about which few if any of us knew much at that stage) but about the personal and legal limbo into which they had been consigned by a society which had energetically brushed these and many other social issues under a conveniently gigantic carpet.

That government had – we thought, hoped or imagined – the kind of new broom that would sweep away at least some of the gross inequalities affecting such children. Mary’s highly detailed draft legislation was therefore introduced in the Seanad. The first hurdle it had to cross was to secure Seanad approval for it to be printed. The previous Fianna Fáil government had prevented all Mary’s legislative initiatives from crossing even this initial hurdle, so we thought we might at least mark an advance under the new management.

Well, yes – and no. But we got to first base, when in 1974 we were permitted to debate the issue of whether the publication of the text of the Bill could proceed. Mary made a brilliantly researched speech. Trevor West and myself were the other two required signatories to the motion to publish the Bill, and spoke in the debate that duly took place. So did Senator Michael D Higgins.

That debate had a number of notable aspects. One was the total absence of speakers from Fianna Fáil. The senators of that party had had several bruising encounters with Mary in the previous Seanad and were probably, in any case, not disposed to give any hostages to fortune by either supporting or opposing the draft legislation. In the circumstances, they took a vow of silence, clearly more attracted to the possibility of watching Fine Gael and Labour handling this thorny issue, and possibly making a mess of it, than by the prospect of offering any hostages to fortune themselves. I was to discover, much later, that the then leader of that party in the Seanad, Tommy Mullins, was privately more disposed to social liberalism. But politics is politics, and the still traditional iron discipline of that party prevailed.

Fine Gael senators generally appeared to have taken the same kind of Trappist oath, with the exception of the person chosen by that party to carry the can of arguing against the legislation, Senator Alexis FitzGerald, a prominent Dublin solicitor. Alexis – urbane, sophisticated, and research-driven – did a superb defence lawyer job of pointing to possible problems in Mary’s draft, but without actually opposing it root and branch.

Michael D, on the other hand, approached it from the Left, arguing that if the Bill had any flaws, they were flaws which made it too restrictive. For this infraction of Labour Party discipline (the parliamentary party was in some difficulties on the issue and had forbidden its members to speak or vote) he had to run the gauntlet at a subsequent party meeting. He survived this trial, as he did when he voted for another private member’s Bill against live hare coursing.

To say that Labour was internally divided on this issue would be an understatement. Given that any further outbreaks of such rank indiscipline would threaten not only Labour party unity but the survival of the government, Conor Cruise O’Brien devised at about this time a remedy, modelled on the party unity pledge taken by Irish Party members at Westminster in the 1890s. This policy would subsequently activate immediate political trouble for any Oireachtas member failing to “sit, speak and vote” with the party.

Under a future leader, Frank Cluskey, Labour adopted a more sophisticated response to Charlie Haughey’s legislation to legitimise the limited sale and purchase of contraceptives, which also threatened a massive split in the ranks of its TDs. This was to describe the government’s Bill as irreformable (an untruth) and to whip all the Labour TDs into opposing it on these dubious grounds, as Labour TDs were, privately, totally divided on the issue.

Mary’s speech on the rights and needs of children born out of wedlock inaugurated a brief debate, which was eventually adjourned to a future specified date. If members – or journalists – had been sufficiently attuned in to the realities of party politics, they might have picked up on the warning by the Fine Gael leader in the Seanad, Michael O’Higgins – no relation to Michael D, it is probably superfluous to add – who noted carefully (possibly on the basis of a secret government agreement) that adjourning a debate to a specified future date did not mean that the debate would necessarily be resumed on that – or any – future date. Nor was it.