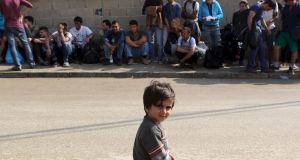 A child sits in front of other migrants waiting for the lunch offered to them for the celebration of Eid-al-Adha in the village of Miratovac, south Serbia. Photograph: Hazir Reka/Reuters

“It is clear that the greatest tide of refugees and migrants is yet to come. Therefore we need to correct the policy of open doors and windows.” So said Donald Tusk at the EU summit meeting on Wednesday.

As president of the European Council he had just returned from a visit to the Syrian frontline states of Turkey, Jordan and Lebanon, so is well informed on the condition of the four million refugees there.

Population pressures are now push and pull factors in the European refugee crisis. They are plainly there in the surge of Syrian refugees from Turkey through Greece this summer.

In the camps on Syria’s border people have given up hope of peace returning, going home or finding employment in Turkey itself.

Led by younger men they are responding to signals from northern Europe that they could have a better life there - alongside Afghans, Pakistanis, Albanians, Kosovars, Eritreans, Sudanese and Nigerians who make up most of the other refugees and migrants.

Germany’s dramatic gestures of readiness to take in millions of refugees are a clear pull factor in the crisis.

Political leaders there translated the generous popular spirit of hospitality into the country’s longer term needs.

The German economy is near full employment and needs more skilled workers, while its population is falling and needs replacement over the next generation.

The effort to match crisis response and longer term planning is specifically German, prompting huge questions of identity and integration.

Demographers study long term population trends and issue projections based on analysis of comparative statistics on fertility, mortality and migration.

The most authoritative estimates for world regions are made by the population division of the United Nations’ Department of Economic and Social Affairs. Its latest ones were issued in July.

They are well aware that prediction is uncertain, but demographers fare better than most other disciplines because their core assumptions are so clearly specified.

South Asia will also grow by more than half a billion by 2050.

Such figures show starkly how the population of Europe’s southern neighbourhood, from which most of the people are now coming, will radically change in coming decades.

Such a reality lies behind Donald Tusk’s statement that “the greatest tide of refugees and migrants has yet to come”.

He referred to the eight million displaced Syrians within the country, the four more million outside it and the estimated two million waiting to cross the Mediterranean from north Africa.

These estimates by the European Commission are quoted by its officials in briefings on the crisis.

Those directly concerned say the EU is well able technically to absorb a million or more of them; but the political will to do so is much more problematic.

Their argument is based on a growing realisation that the sharp legal distinction between refugee and migrant we use, based on European experience after the second World War, is no longer valid or feasible to deal with what the Oxford migrant researcher Alexander Betts calls “survival migrants”.

For them environmental change, food insecurity, and generalised violence, for example, represent emerging sources of human displacement producing such migrants.

In strong states, the government can usually provide some kind of remedy or resolution to people affected by these types of crisis.

However, this is much less so in fragile states which overlap substantially with those the UN expects to experience large population increases.

Responding to these challenges in the longer term must therefore go well beyond Tusk’s correction of the policy of “open doors and windows”, however necessary it is to resecure the EU’s borders after this trauma.

EU officials currently reviewing its neighbourhood, foreign, security and aid policies for the years to come are building in far deeper engagement with governments in these regions, based on mutual interests and core values.

This would seek to develop their economies and societies, strengthen their states and therefore minimise migration.

But it must also prepare for the inevitable flow of people towards a rich European region with a declining population over the next generations.