Peter Charleton: National Archives permits us to learn from mistakes 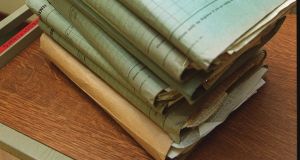 Papers dealing with the State’s response to the outbreak of violence in the North in 1969: by investing in a digital archive, State departments will be able to transfer emails, business files, digital images and other electronic records to the National Archives. Photograph: Bryan O’Brien

‘Better to have a nation without her history than have history but no nation” are the words apocryphally ascribed to Ernie O’Malley as he and the other “Irregulars” occupying the Public Records Office of the Four Courts barricaded documents against bullets from the Free State forces in 1922.

A similar use had been made of the huge ledgers from the Court of Chancery in the 1916 occupation of the Four Courts. One of the precious possessions of the National Archives today is such a book, penetrated by a bullet up to half its width.

Little damage was done in 1916 but 1922 was a disaster. The Irregulars used the vaults to store bombs. A direct hit from artillery on Wood Quay blew centuries of records sky high, with pieces of parchment from the time of Henry II found weeks later on Howth Head. The census records from 1821 through to 1891 were almost completely destroyed. Since then, the National Archives has attempted to supplement its damaged holdings, but what has been lost is gone forever.

The recurrence of such a holocaust, for that is how archivists reference it, would be unthinkable, but history is on the point of repeating itself. In 1988, I bought my first office computer, 20 megabits of storage was the puny spec and, in 1991, I first went on email. Over two decades, this common story of moving from work through paper to digital records has been repeated throughout the country.

The National Archives Act 1986 requires public bodies to preserve records for the National Archives. These are released for scrutiny in Bishop Street after 30 years, soon to become 20 years. Some branches of the public service have led the way in the hunt for paperless administration. Interaction over passport cards, planning permission and returns for taxation are now almost exclusively web-based. Some receive emails in the hundreds of thousands over any month.

Many departments are well on the way to doing all business digitally and, rightly, those leading the modernisation of the public service, principally the Department of Public Expenditure and Reform, see a need to manage these electronic records.

Where does that leave the archives of the future? In a very bad place. Searching the online databases of the National Archives is fun, with millions of hits on the census records, and an amazing response to such online exhibitions as the soldiers’ wills from the Great War, the 1921 Treaty and the secret police files of 1916. The acquisition and preservation of archives is crucial to how this country sees itself.

Many people pass the National Archives building without knowing what happens there. It is the guarantor that this country will have a history – and a history that calls the State to account.

While the McAleese report on the Magdalene laundries was lauded, what is not appreciated is that the first port of call for any analysis of our past is Bishop Street. The conclusions of that report were underpinned by months of work into court and government records. Whether in ancient scandals such as the mother-and-baby homes or those affecting us now, like Anglo Irish Bank and property inflation, if mere opinion or, worse, myth is to be replaced by historical analysis, the records are needed. These will be lost unless a policy, staff and technical infrastructure of support are implemented.

Although there is a deluge of data, not every record needs preservation. Regulations from government on the management of records were central to the 1986 Act but have never been issued. The digital age demands them. The policies and plans proposed by the director and staff of the National Archives can then begin to address this gap and move us towards coherent and integrated records management, both paper and electronic.

Certifying officers in Government departments need guidance; however, in the absence of secondary legislation, mere policy is useless. Their roles should be expanded to working with the National Archives to ensure records for long-term preservation and transfer are identified early and treated appropriately. Investment will be cost-effective.

By starting late we may draw on the lessons learned in other jurisdictions and build an efficient system. Money should be directed to the National Archives for developing this plan so there are sufficient resources to capture, manage and preserve our digital heritage. This institution, the precious repository of this nation, deserves to be supported in ensuring Ireland continues to have a history, a vital component of any honest polity. Peter Charleton is a Supreme Court judge and the outgoing chairman of the National Archives Advisory Council