Peak experience – An Irishman’s Diary about being a mountain guide 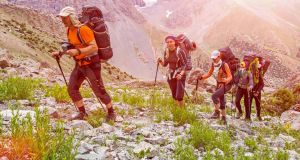 A mountain leader must fulfil the duties of safety officer, navigator, counsellor, motivator and occasional dictator

When I tiptoed into mountain leadership more than 25 years ago, my recurring nightmares involved naively leading everyone over a cliff, becoming irrevocably lost with night approaching, or getting the group cragfast halfway down a precipitous gully. To the surprise of many, including myself, none of this came to pass, but I did learn that essential to the role of a mountain leader is a sanguine temperament and an ability to multi-task extravagantly. An appreciation of the varying personality types that inevitably exist within walking groups is also an advantage. According to the demands of the moment, a mountain leader must fulfil the duties of safety officer, navigator, counsellor, motivator and occasional dictator, while also being prepared to accept the role of scapegoat when things go awry.

The first duty of the leader is to check that everyone has the right gear. This task is usually accomplished while fielding questions from “fatalists” (personality type 1), about the likelihood of the chosen route creating a collective meltdown and leading to a helicopter evacuation. Having reassured everyone that the objective is a vertically unassuming Irish mountain and not K2, the leader will next try to assemble an orderly convoy of automobiles and inform drivers about the location of the trailhead while also taking calls from tardy walkers with requests to “hang on for five minutes”.

Eventually, the cars get away and with luck everyone will show up at the trailhead but more likely “Sod’s Law” will intervene and one car will be missing. Further frenetic phone calls are now required as the leader paces around with the animation of a Shakespearian actor while others in the group wait with the ill-disguised impatience of toddlers in a McDonald’s queue. Given some luck, the missing car will eventually screech to halt with the driver proffering some lame excuse about a necessary diversion to the shop, petrol station – wherever!

All present, the group sets off enthusiastically and is immediately awash with happy conversation. Walking uphill is, however, a strenuous business no matter how we idealise it and soon bubbly conversation is replaced with silent, heavy breathing.

While hillwalking may or may not build character, it certainly reveals it and distinct temperaments now emerge. Immediately obvious are the “streakers” (personality type 2). These are usually lapsed couch potatoes who, with the zeal of a convert, have become gym-slim. Despite admonitions that “you are not on this walk if you are ahead of the leader”, they refuse to take slow for an answer. The leader races upwards to haul them back only to discover that another group “the laggards” (personality type 3) have now formed a mutual appreciation society at the rear. Ambling with preternatural slowness, this faction will immediately halt, snack and chat whenever the leader stops to let them catch up. Soon, everyone is spread out over hundreds of metres and only a hissy fit from the weather is guaranteed to save the situation.

If mist rolls in, the streakers will instantly retreat to the security of the main group and the laggards will miraculously catch up. The situation is back in control, but if the weather turns really foul there will probably be a barrage of questions obliquely casting doubt on the competence of the leader. Are we on the right route? Why aren’t we there yet? Did you get the forecast? Savvy leaders will accept this with equanimity for long experience has taught them that such interrogations arise from insecurity. The seemingly endless upward struggle creates a fear of failure leading to a natural human inclination to seek scapegoats – the leader, the weather, the fast pace.

Then, a golden burst of sunlight illuminates the mountaintop ahead. Gripped by summit fever, streakers, fatalists and even laggards combine in a rush for the top. Everyone basks in the warm glow of success and the leader is promoted – if not exactly to flavour of the month – at least to flavour of the moment.

Summit fever spent, the descent begins in mellower mood as the mountain weaves its spell. People are now busy bonding. Locked in animated conversation, while still in the afterglow of achievement, they require concentrated shepherding to ensure they don’t stray before reaching the trailhead. Here carping is forgotten amid effusive compliments for the leader, with “nobody ever doubting the group would get back safely.” These plaudits are accepted modestly, for astute mountain leaders know that they are only as popular as their last lead.

1 Covid-19: Pressure over breakdown in tracing system intensifies as State enters Level 5
2 One hundred Irish retailers for all your online Christmas shopping
3 Life under Level 5: Where can I go, who can I see, what is closed?
4 Thousands of gardaí mount checkpoints and patrol parks, beauty spots
5 Developer’s impeccably restored Fitzwilliam Square Georgian for €3.5m
Real news has value SUBSCRIBE