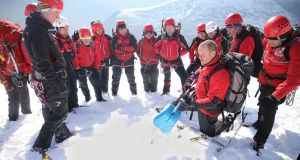 While Ireland was preoccupied with celebrating the 50th anniversary of the Easter Rising, a student from UCD set off alone from Killarney to ascend Ireland’s highest mountain. Tragically, he died in a fall on the east face of Carrauntoohil, which was then little known and almost entirely unmapped.

Soon after, a member of an English school party was also killed in the same area.

In the light of these events and with increasing numbers having recourse to the Kerry Mountains, a local man, Frank Lewis, decided that action was needed. In July 1966, he assembled a team of volunteers willing to provide rescue services to those in difficulty on the unforgiving slopes of Ireland’s highest summits.

The skills of the new Kerry Mountain Rescue Team (KMRT) were soon tested stringently. The all-night rescue of Bill Collins from a remote and vertiginous mountainside, which has since been named Collins’s Gully, still remains one of the most demanding epics of the team’s history.

Rescuer Paddy O’Callaghan recalled, “The terrain was desperate and we had no helmets and only minimum equipment. We could have been killed or injured ourselves but the mission was a success and we went on from there.”

Providing a volunteer rescue service to the unforgiving mountains of Kerry and West Cork was clearly no place for well-intentioned amateurs, but instead required mountaineers with geographic, technical and medical competency.

Such competency was further tested in the severe winter of 1986 when three climbers were avalanched 500 feet down an area known as Curved Gully. Formidable ice-climbing skills were then required to lower the casualties in darkness down a frozen waterfall from where they could be evacuated by helicopter at dawn.

Another epic in December 1998 involved five Dublin teenagers camping on Carrauntoohil. A storm blew down their tent and they spent the night shivering in survival bags. One teenager knew of a hut high on the mountain, and at first light he managed to lead the others there, which probably saved their lives.

Tired and suffering from dehydration and cold, they sent two of the group down to alert the KMRT.

Realising that speed was essential and that another night on the mountain would prove lethal, the rescuers began forcing their way upwards in what were described at the time as “desperate conditions”. They arrived just in time, for the remaining youths were suffering from hypothermia and needed to be warmed up before they were fit to be transported down.

Of course, not every call-out ends heart-warmingly. When reports were received, in January 2002 that three climbers had fallen in a remote area of McGillycuddy’s Reeks, a rescue team was immediately airlifted to the scene. An injured person, found beneath a steep gully, was evacuated by helicopter in gathering darkness. A treacherous night search then confirmed every mountain rescuer’s worst nightmare – two other climbers had perished. Rescuers stayed with the remains throughout the long January night and next morning began the harrowing task of lowering the bodies. So inaccessible was the area, the bodies had to be transported over a lake in an inflatable canoe before being airlifted out..

This year, KMRT celebrates 50 years of service to all who love exploring the magical mountains of Ireland’s southwest. In the intervening half century, much has changed in terms of equipment, search management, first aid and technical climbing competencies, but one factor has remained constant: the Kerry mountain rescue service is provided on a totally voluntary basis.

Increasing numbers of visitors seeking recourse to the Kerry hills has inevitably led to more call-outs, more rescues and, most frustratingly, exhausting night searches for individuals who got down safely but neglected to say so.

Yet, despite the growing demands, there is never a shortage of volunteers to take up the rescue mantle. In times of diminished volunteerism, this shows an extraordinary commitment to a task that is often dangerous and traumatic, while never anything but physically demanding.

According to the KMRT’s Alan Wallace, the 35-strong rescue team provided the unpaid equivalent of 2,600 hours (about four working weeks) in assisting 48 individuals who found themselves in difficulty on the mountains of Ireland’s southwest, during 2015.

“So far 2016 has been even busier with an average of one call-out each week. We have been called to four especially serious incidents so far, and three of these have been on Carrauntoohil, so the lesson is not to treat Carrauntoohil as an outing, but as a serious and potentially dangerous challenge for which everyone should be adequately prepared,” says Wallace.

Donations to KMRT can be made at www.kerrymountainrescue.ie/donations

1 Coronavirus: No new Covid-19 deaths reported in State for first time since March
2 Tributes paid to Ireland’s deputy ambassador to China who died on Sunday
3 Coronavirus: What will reopen in Ireland’s phases to ease restrictions and what are the dates?
4 André Leon Talley: How Anna Wintour threw her right-hand man ‘under the bus’
5 Unidentified man has been in Irish psychiatric hospital for 30 years
Real news has value SUBSCRIBE