Paddy Monahan: Segregation of four-year-olds in schools has to stop 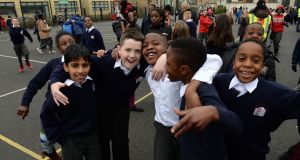 The law that allows schools to discriminate against four-year-old children, segregating them at the earliest possible stage in their education, is an international embarrassment. Photograph: Dara Mac Dónaill

‘Doublespeak: language that deliberately disguises, distorts or reverses the meaning of words.” The piece of legislation that enshrines the right of 96 per cent of primary schools to turn away children on the basis of religion is called the Equal Status Act. The Minister of State, who on December 2nd asserted the right of schools to discriminate against children in enrolment on the basis of religion, is known as the Minister for Equality.

Aodhán Ó Ríordáin, addressing amendments seeking the repeal of this legislation so children can access local schools without religious enrolment criteria, upheld “the right of every religious denomination to manage its own affairs and maintain institutions for religious or charitable purposes”. That doublespeak requires analysis.

Religious denominations control more than 96 per cent of primary schools in Ireland, but the schools are funded by taxpayers: teachers’ salaries, building works, light and heat and so on are all paid for from your pocket and mine.

The Equal Status Act 2000 allows oversubscribed schools to prioritise children of the patron’s denomination in enrolment and thus functions to discriminate against children at the earliest stage in their education and segregate them based on religion.

Probably the most shocking abuse of language in the Minister’s statement is the reference to the right of religious denominations to “maintain institutions for religious or charitable purposes”. At first, one wonders what institutions he means. Is someone suggesting we close churches? It takes a moment to realise he is talking about schools. The 3,000 primary schools controlled by the Catholic church, for example, are now “institutions for religious or charitable purposes” – there was me thinking they were a fundamental part of the State’s system of education.

The Minister for Equality defers to “the right of every religious denomination to manage its own affairs”. Ostensibly, this seems an innocuous statement, but the Catholic church controls more than 90 per cent of Irish primary schools, and the Minister means to include this as part of the church’s “own affairs”.

Why is this Government going to such lengths to suggest the education system is not its responsibility? Our Constitution clearly compels our legislators to repeal section 7(3)(c) of the Equal Status Act, which allows schools to prioritise children of the “right” religion. Article 44.2.3 of the Constitution states, without any qualification: “The State shall not impose any disabilities or make any discrimination on the ground of religious profession, belief or status.” There is no uncertainty here.

My friend Roopesh Panicker’s little girl Eva was rejected by the schools in his area because she is Hindu. She asked her dad why she couldn’t go to the same school as her friends. The answer is that under Irish law she is a second-class citizen.

The religion, beliefs and ethics subject mooted for Irish primary schools is an interesting proposition. However, in the circumstances one cannot help but think it is a touchy-feely distraction from the real issue. In the Irish education system children will learn about Hindu children like Eva, they just won’t meet them in the classroom. Children will learn about diversity while experiencing segregation.

This summer I started a petition for the repeal of this law that allows schools to turn away children on the basis of religion. It has almost 20,000 signatures. All children should have an equal opportunity to attend the school around the corner. But as things stand my little boy will not be able to go to our local school because it is oversubscribed and he is not baptised.

I am not trying to change the ethos, patronage or ownership of schools. Repeal of this law will not stop schools teaching religion. I do not ask that a school for unbaptised children be built. What’s wrong with children from different backgrounds mixing at school?

Education Equality, which launched on Saturday, has the twin goals of equal school access and equal respect during the school day, the latter meaning those children not of the patron’s ethos who get a school place should not be ostracised while “faith formation” takes place.

Schools are not “institutions for religious or charitable purposes” and responsibility for them is not something the State can disown. The law that allows schools to discriminate against four-year-olds is an international embarrassment: it must be repealed now.

Paddy Monahan is a barrister and concerned parent