Opinion: Who has the answer to the housing crisis? 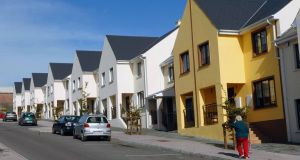 Social Housing in Hollyhill in Cork. High levels of council housing did not stop housing booms or busts, but it did mean their impact was lessened. Photograph: Daragh Mac Sweeney/Provision

We have had the opening salvos on housing in the general election, with all parties recognising there is a crisis. Headline polices in response include the Labour Party giving first-time buyers €6,000; Renua promising public-private partnerships to attract construction firms into building on local authority land; Fianna Fáil wanting 150,000 social housing tenants to buy their homes. In contrast, Sinn Féin promises to build 100,000 social and affordable homes in the period up to 2030 and People Before Profit wants to build 50,000 council houses over the next five years.

As the election goes on there will be many more promises of help for first-time buyers; innovative ways to build more homes; making mortgages easier to get; changing the Central Bank rules; relaxing building regulations, and on and on.

The plethora of initiatives and related numbers can quickly become confusing. So how can we try to evaluate the policies and what would be the best direction for housing policy in the next Dáil?

First, we need to recognise that there is a contradiction at the heart of any housing policy – houses are commodities as well as homes. As with all commodities, market prices fluctuate. They can increase (which is seen as “normal” for housing) or they can fall (often dramatically) with devastating consequences, as we have experienced since 2007.

Second is the other side of the contradiction; houses are not commodities like gold or coffee beans. They satisfy the basic human need for shelter, never mind the emotion we invest in building a home in which to raise our families.

Third, one of the housing policy lessons we learned in these islands, more than 100 years ago, was that the market cannot supply decent, affordable housing for all.

The slums and tenements at the end of 19th century were documented and publicised by many social reformers and, combined with labour unrest, lead to the development of council housing. So that this paper commented in 1913: “If every unskilled labourer in Dublin were the tenant of a decent cottage of three or even two rooms, the city would not be divided into two hostile camps.”

Council housing was a huge advancement for poor and working class people, having a dramatic impact on health, life expectancy and educational achievement as they escaped the slums.

In this way council housing plays an important role to the benefit of the whole of society. It provides an outlet for pent-up demand, where individuals and banks do not need to become over-exposed through high, unsustainable levels of debt. Furthermore, it provides an income stream back to the public purse through the rent paid; therefore becoming self-financing.

So, when it comes to evaluating alternative housing policies, the question to ask yourself is straightforward – will this policy increase the number of houses in the market or is it going to provide secure homes, outside of market relations?

Applying this question to the Labour Party policy on first-time buyers, not only does it look like an election bribe, but it will actually make the housing crisis worse by inflating prices.

The Fianna Fáil policy of an enhanced right-to-buy for social housing tenants, a favoured (and now widely discredited) Tory party policy in Britain, would reduce the stock of council houses, enabling more homes to get caught-up in the next housing bubble.

We are regularly told by our political leaders that lessons have been learned and that “we are not going back to the old days of boom and bust”.

Housing policy in this election allows us to test which politicians actually have the policies to back up these claims.

Dr Stewart Smyth lives in Dublin. He is co-director of the Centre for Research into Accounting and Finance in Context at the University of Sheffield, where he researches social housing finance