Noel Whelan: We should be proud of 1916 commemorations

Events were dignified, inclusive and reflected the complexity of the Easter Rising 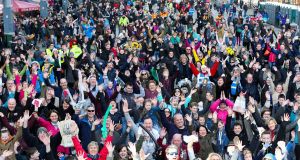 There is at times a reluctance among us Irish to be seen to say a public thank you to or congratulate those responsible for a job well done. To engage in such expressions of gratitude runs the risk of being accused of seeking to ingratiate.

Well, this week I am happy to take that risk. All involved in the 1916 commemorations last weekend, and over the previous weeks, should take a collective bow.

Overall, the various commemorations served an important purpose in asserting the national ownership, as opposed to any particular political claim, over the venues, the symbols and the heroes of the Rising.

The commemorations were dignified but they were also comprehensive and inclusive, reflecting the complexity of the story of the Rising.

The families of the participants were appropriately acknowledged over the weekend, while at the same time it was clear that the Rising and its remembrance belonged to the nation generally.

The decision to place our Defence Forces front and centre in Sunday’s parade was inspired. So too was the choice of an officer, rather than a dignitary, to read the Proclamation.

The point was cogently made that there is only one true successor in title to those who fought in 1916.

The earlier decision to have the Army visit every primary school to present them with a national flag to use on Proclamation Day was also important in the same context.

It was moving to be among the half a million who watched the ceremonies from O’Connell Street as relayed over screens around the city centre at Sunday lunchtime.

You could hear a pin drop on Dame Street during the minute’s silence just before the thousands joined in a rendition of the National Anthem.

The efforts of national and local commemoration committees, and the work of government departments and a range of national institutions and organisations, bore fruit in the creativity and colour of the commemorations.

Many individuals who made the commemorations such a success come to mind but to name any would fail to recognise the contributions of others.

The efforts of RTÉ, however, are worthy of particular mention.

Over the last weekend of February I had a close-up view of RTÉ’s capacity to deliver incredibly comprehensive coverage of the marathon election count.

Indeed, the station’s campaign coverage across all broadcast and new media formats was stunning.

It broadcast an impressive series of documentaries on various aspects of the Rising and its consequences, many of which put substantial new historical research into the public domain.

Most notable among these was Michael Portillo’s look at the British archives for his programme The Enemy Files and Joe Duffy’s work on The Children of the Rising.

RTÉ’s coverage of the Sunday ceremonies, and the Sunday afternoon choral event A Nation’s Voice from Collins Barracks not only lived up to the station’s high standards for coverage and commentary on historic events but also showcased the most up-to-date technology and production techniques, enhanced as it was by the precarious sunshine.

RTÉ was also the principal force behind Reflecting the Rising, the multi venue one-day festival of talks, performances and public events which brought more than 700,000 people into Dublin city centre on the Bank Holiday Monday.

It must have been a logistical operation on a massive scale and yet appeared to go off seamlessly.

The spectrum of topics discussed at locations over the day was true to the title.

Among the most thought provoking was an event in Trinity College which included typically robust contributions from Prof Paul Bew and Eoghan Harris, each of whom offered a more jaundiced view of the Rising than generally available over the weekend.

RTÉ’s production Centenary, broadcast on Monday night, was the icing on the commemorative cake.

It was an awesome depiction of the best of modern Irish culture, performance and production.

The Rising, its importance and its consequences, are contested and there is no single appropriate way in which to mark it.

It would have been difficult to commemorate it in a way with which everybody agreed.

All involved can take some pride, however, in the fact that last weekend it was commemorated in a way which more than satisfied most.

1 Coronavirus: Dublin hospitals under ‘significant pressure’ as county set for Level 3
2 Life in Level 3: What will happen under new restrictions in Dublin?
3 Stephen Donnelly dodges the questions as Matt Cooper mercilessly pursues the answers
4 Coronavirus: Indoor dining, weddings, funerals, travel to be hit as Dublin set for Level 3
5 Cluster among golfing group in Midlands a 'significant Covid-19 incident'
Real news has value SUBSCRIBE