Clare Daly TD uses Dáil privilege to discuss a judge who had presided over a case in which she was involved. 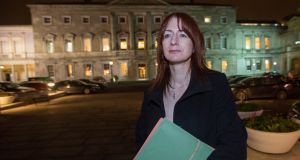 Independents 4 Change TD Clare Daly: her outburst in the Dáil “undermines the separation between politics and the judiciary”. Photograph: Fergal Phillips

The separation of powers is a constitutionally mandated and necessary cornerstone of our robust system of democracy and laws.

Politics and the making of laws are the realm of politicians; interpreting the law and adjudicating on alleged breaches of the law are matters for judges.

At one time any reference to judges or judicial activity in the Oireachtas or by any politician was frowned upon. Nowadays, as in all things, more latitude is allowed in parliamentary and public debate.

Some easing of the protocols is appropriate. There is no need to be overly stuffy about such matters. It is in the interest of public debate that politicians feel free to comment generally on judicial determinations and indeed on judicial performance.

However, there has been one disturbing trend in recent months that goes well beyond appropriate latitude, namely a tendency for politicians not only to comment on individual cases but in some instances even to comment publicly on criminal cases in which they themselves have a direct stake.

Some of our politicians seek to use their political profile and, in some instances, their position in parliament itself to comment on or influence the public perception of legal proceedings in which they themselves have been or will be personally involved.

Independents 4 Change TD Clare Daly’s speech in the Dáil on Wednesday night criticising how a minor speeding offence, which she admitted to, was dealt with by a District Court judge earlier that day is just the most recent in a pattern of such political outbursts.

Many will admire her display of chutzpah. Some may even agree with her.

However, it should worry anyone interested in a fully functioning democracy within the rule of law that a TD chose, behind the wall of parliamentary privilege, in personalised and robust terms, to criticise a judge who dealt with the deputy’s own case.

Such outbursts not only undermine the separation between politics and the judiciary, but ultimately threaten the fair administration of justice and the interests of ordinary litigants or accused people who do not enjoy the publicity or public position which Daly enjoys.

Daly said the judge had made “an irrational decision” and she characterised the manner in which he had acted as “ludicrous”. She also implied that it was necessary for her to make this criticism in parliament because there was no other manner in which judges could be held to account.

The reality, however, is that if the judge’s decision to issue a bench warrant or any other decision was ludicrous or irrational in law then Daly, like every citizen, has the right to challenge it. This can be done either by appeal to the Circuit Court, where another judge will give it a full rehearing, or by means of an application for a judicial review if a legal basis for such exists.

Daly’s outburst was not the only example of this trend of politicians commenting publicly on criminal cases in which they themselves are involved. Anti-Austerity Alliance TD Paul Murphy has been similarly indulged by the media in so doing.

Murphy faces criminal charges arising from events in Jobstown, Dublin in November 2014 when then tánaiste Joan Burton and her adviser were allegedly falsely imprisoned in her car.

What, if any, involvement Murphy had in that alleged false imprisonment will be determined in due course by a jury sitting with a judge in the Circuit Criminal Court.

That decision will come after the jury have heard all relevant evidence including any evidence which Murphy and his co-accused choose to put before them. He will also get to make any legal argument he wishes.

Since he has been charged, however, Murphy has been involved in a public political campaign to criticise the very fact that the charges were brought by the Director of Public Prosecutions at all and to suggest that any conviction would amount to a criminalising of protest.

During the course of the recent trial of a teenager charged with similar offences arising from the same events, Murphy co-ordinated a protest campaign outside the court.

This could create the impression that he is seeking to influence the District Court judge hearing the trial to take a certain course – but would not have influenced him in so doing – or of influencing the view of the case among the general public, from whom a jury in Murphy’s own trial will ultimately be drawn.

Pre-trial or post-trial spin is unattractive irrespective of whether it is attempted by pin-striped PR gurus on behalf of wealthy clients or by left-wing politicians in their own interests. It should always be called out for what it is.

1 ‘It was pitch black’ - Rescued teenager describes night afloat with her cousin in Galway Bay
2 Coronavirus: Number of outbreaks in Irish homes rising for five straight weeks
3 Britain fails yet again to take Ireland into account
4 Conor Pope’s staycation diary: ‘It’s like I’m staring at a Polaroid of my childhood holidays’
5 Nine tenants evicted from north Dublin property by men in masks and dark clothing
Real news has value SUBSCRIBE