Newton Emerson: It is stupid sectarian business as usual for the North’s councils 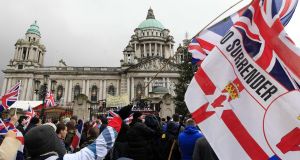 The 2012 flag dispute in Belfast City Council, which paralysed Stormont for years, shows how drips of poison on the ground in Northern Ireland can seep suddenly, disastrously upwards. REUTERS/Cathal McNaughton

In Northern Ireland, to paraphrase Tip O’Neill, all stupid politics is local.

The lowest form of a territorial dispute is the marking of territory and that tends to bring toxic rows about flags, street signs, memorials and commemorations under the lowest tier of government – the North’s 11 district councils.

This is a fundamental problem for Stormont’s shiny new DUP-Sinn Féin administration. Both parties have reached a genuine rapprochement at regional level but locally it is still stupid business as usual. In the past week alone, DUP and Sinn Féin councillors have been at each other’s throats over war memorials in Magherafelt, bonfires in Derry and flags for the Queen’s birthday in mid-Ulster. The Derry and mid-Ulster arguments were actively started by Sinn Féin and DUP representatives respectively.

In every case, councillors observed the tribal divide rather than Stormont’s new divide between a DUP and Sinn Féin executive and a UUP and SDLP opposition. There is no rule that says a truce at one level of government should apply to every other. The Conservative and Liberal Democrat coalition at Westminster in the first half of this decade was a model of professionalism, while out in their regional strongholds both parties continued the dirty tricks for which the Lib Dems especially are notorious. But England will never descend into anarchy over a flag on Truro town hall. The 2012 flag dispute in Belfast City Council, which paralysed Stormont for years, shows how drips of poison on the ground in the North can seep suddenly, disastrously upwards.

This reversed a British government intervention at the start of the Troubles to disempower councils and limit their scope for sectarian discrimination. Equality law supposedly constrains them today but there are already numerous examples of local majorities straining against it.

Councillors remain oddly powerless in the strategic sense, merely voting on policies put before them by officials. In parliamentary terms, they are an assembly but not an executive, which can also encourage tribal grandstanding. This is best seen over parading disputes, which are not a local government responsibility but which still dominate council “debates” for years. Just as the new councils have been created, the personal link between councils and Stormont has been broken by the end of so-called double jobbing, where one person could hold multiple elected offices. Why this venerable feature of Northern Ireland’s democracy was outlawed remains a mystery – by definition, the voters had no objection to it. Party leaderships may have welcomed the extension of income and patronage that resulted from having more seats to spread around, along with the break up of rival power bases. Whatever the advantage, the disadvantages are less cohesion, more people to manage and a potentially even poorer calibre of councillor.

Stormont’s biggest vulnerability is the nature of the DUP-Sinn Féin truce, which is based on ducking stupid arguments. Flags, parading and the Irish language are indirectly referenced in the new executive’s draft programme for government but this is merely more stretching of the long finger. Both parties have been congratulated for a focus on “real issues” like the economy and education, which is taken as a sign of their commitment to stability. Yet if their councillors inject some poison, how strong is a relationship based on not devising an antidote?

Stormont’s two largest parties should be commended for showing enthusiasm about pragmatism but history provides a warning as to why their truce needs to be more widely applied.

There was rapprochement at Stormont from the mid-1960s, with the unionist government reaching out to Dublin and nationalists ending abstentionism to enter opposition. However, many of the grievances bubbling up towards the start of the Troubles – housing, gerrymandering, one-man one-vote – were specifically council responsibilities. This is a grotesque simplification, but true nevertheless. Sinn Féin and the DUP are confident they can see off opposition from other parties at Stormont but do they see the opposition from within and below?

1 Aidan Turner: ‘That photograph. Yeah. It took away from the work’