‘The claimed constitutional right to same-sex marriage is arbitrary, incoherent and irrational’ 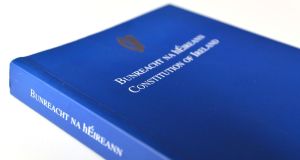 ‘It seems puzzling to consider that a loving commitment between two men amounts, through that love alone, to “the natural primary and fundamental unit group of society”, as Article 41.1.1 of our Constitution describes the married couple. It is not surprising that many of the more reflective supporters of redefining marriage argue that, as a matter of consistency, marriage should be removed to the sphere of private contract law.’ Photograph: Alan Betson / THE IRISH TIMES

A constitutional right to same-sex marriage seems plausible on first viewing. Yet it does not stand up to critical analysis.

Every right requires a justification. Standing behind the claimed right to same-sex marriage is the following proposition: marriage is the legal recognition of a loving commitment between adults. Let us call this the “adult partnership” model.

Clearly, the adult partnership model of marriage cannot justify a law restricting marriage to opposite sex couples. As former tánaiste Eamon Gilmore put it in April 2013, “[It is] not the role of the State to pass judgment on who a person falls in love with, or who they want to spend their life with.”

But equally this view of marriage cannot justify restricting it to couples only. What principled basis could a Yes campaigner for “marriage equality” have for such a restriction? Appeals to dictionary definitions? Tradition? Religious convictions? The idea that polygamous or polyamorous relationships involving three or more consenting adults espouse a lesser quality of love than the love couples have for one another? Each of these reasons rebounds to undermine the Yes campaigner’s position. The “marriage equality” view has no principled reason for discriminating between different types of consensual and committed relationship.

For similar reasons, the Yes campaigner cannot explain why marriage is an inherently sexual union. It may sound odd to argue that platonic relationships could be recognised as marriages, but, on the adult partnership model, why shouldn’t they be? Again it’s not sufficient for the Yes campaigner to assert that marriage just is a sexual union and that’s it. This is no argument at all. It is also inconsistent with the Yes campaigner’s frequent assertion that marriage evolves according to social circumstance. It is certainly possible to envisage circumstances in which co-dependent elderly siblings or a carer-dependent relationship would stand to benefit from the rights and entitlements marriage confers. These people often exhibit profound commitment to and love for one another so why should they be denied access to marriage? What justifies this inequality – the idea that the State should view sexual love as superior to other types of love?

Finally, the Yes campaigner cannot justify the State expressly supporting marriage above other relationship types in its constitutional, tax and other laws. Why should the State regulate and promote a relationship defined solely by the presence of a strong emotional bond between consenting adults? No one thinks that the State should do the same for friendships, for instance, however close or strong they are. It seems puzzling to consider that a loving commitment between two men amounts, through that love alone, to “the natural primary and fundamental unit group of society”, as Article 41.1.1 of our Constitution describes the married couple. It is not surprising that many of the more reflective supporters of redefining marriage argue that, as a matter of consistency, marriage should be removed to the sphere of private contract law.

On each of these points the Yes campaigner’s partnership model of marriage founders: marriage as a union of two, marriage as inherently sexual, and marriage as worthy of express State support.

A coherent explanation of all these characteristics of marriage is only possible under an alternative view, the view that marriage is a comprehensive inter-personal union. The kind of union contemplated here is not just a union of hearts and minds, but a union of bodies too. It is a union whereby persons freely commit to becoming “one body” or “one flesh” with one another. This type of commitment is possible only between two people, and is only possible where the two people are of different yet complementary sex. By its very nature this union – and only this union — explains the rationale for the laws relating to consummation of marriage and prohibition of marriage between family members. And because this is precisely the kind of union oriented towards children and providing those children with both a mother and a father, this union deserves special State support and recognition.

This view of marriage is not confined to our own Constitution. It is also enshrined in Article 16 of the Universal Declaration of Human Rights. That article considers marriage as a man-woman union, as linked to the founding of a family, and as “the natural and fundamental group unit of society . . . entitled to protection by society and the State.”

Nothing in this view of marriage supposes that gay persons are lesser than other persons. Current marriage law unjustly discriminates against neither gay relationships nor platonic relationships nor polygamous or polyamorous relationships. One can consistently and passionately believe in both the fundamental equality of all human beings and the unique nature of marriage as a union of sexual difference. One can also reject the risible contention that sexual difference is some arbitrary legal requirement for marriage, similar to how racial identity was under the (secular) law of certain states in the modern era.

Marriage should not be putty in the hands of the dominant political paradigm. It has its own integrity, nature and rationale. By contrast, and despite initially seeming plausible, the claimed constitutional right to same-sex marriage is arbitrary, incoherent and irrational.

Dr Thomas Finegan, is a member of the advisory committee to Mothers & Fathers Matter

1 Google tells workers to return to country where they are employed
2 Covid-19: One death and 363 further cases confirmed in State
3 ‘Insane’ gathering of hundreds of students in Galway condemned
4 H is for hero: the origin story of Jack Reacher, a billion-dollar brand
5 Speed and distance of Covid-19 droplets tracked by Mater researchers
Real news has value SUBSCRIBE