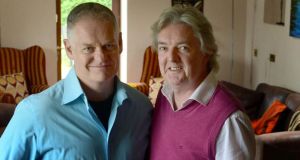 “Time to put it back in the closet, time to let it be just one little part of me and not my defining characteristic” said Vivian Cummins, (right, above, with Erney Breytenbach) . Photograph: Brenda Fitzsimons

One of the most revealing statements over the weekend came from an elated but exhausted Vivian Cummins. It was about the relief of taking off his Yes badge. He was tired of a canvass that had obliged him to wear his sexuality on his sleeve (or lapel).

“Time to put it back in the closet, time to let it be just one little part of me and not my defining characteristic,” he said.

And yet the fact of his sexuality meant everything – to an awful lot of other people. It provoked one of the most bitter national debates in living memory, one that only resolved itself for Cummins on Saturday, when he felt able to look his 15-year-old foster son in the eye and say: See? We’re okay. This country has affirmed that we are a family.

It’s a point almost entirely missed by those on the No side who discern many motes in the Yes eye, in particular what one robust commentator called a deeply unpleasant undercurrent of bullying.

No doubt many No campaigners are indignant that opponents failed to match their ethereal calmness on occasion and that’s regrettable.

So abuse was thrown around.

On the Yes side, a deeply unthreatening canvasser of my acquaintance was called a c**t on three occasions. For some young, straight campaigners, it was the leafy areas that provided their first encounter with subtle, shocking bigotry.

I don’t doubt that serious abuse was thrown at the No side too and it was partly why I requested permission to shadow canvassers from the Mothers and Fathers Matter campaign. This is a routine campaign request, rarely refused, and can provide useful insights into the level and nature of voter engagement.

But I explained that I was also interested in reporting on the abuse allegedly being hurled at their campaigners. Our request – and that of all other journalists, I believe – was refused.

This was all happening, remember, in the context of a debate where a formidable journalist working in our houses of parliament, revealed she had spent decades “passing as straight for fear of being hated”.

Afterwards, Ursula Halligan said her story resonated with so many that it was like a lid on a boiling cauldron had been blown off, exposing a subterranean world of quiet suffering.

Where had that all-pervasive fear come from? How had it become so ingrained in such a forthright woman? Or in a gentleman such as Pat Carey, a former government minister? Why have we less than a handful of openly gay people among our TDs, even now? What might we infer from this about the true nature and reach of bullying, not just over weeks but lifetimes ?

Following the recent UK elections, 32 out of Westminster’s 650 MPs now describe themselves as gay, lesbian or bisexual. It’s a striking figure because at 4.9 per cent, it almost precisely reflects what some researchers believe to be the percentage of that cohort among the general population. At that rate, we should have at least eight in Leinster House.

Then again, the Massachusetts-based National Bureau of Economic Research, which tried various methodologies to counter the lying tendency in surveys, suggests that the figure for people with same-sex attraction could be 10 per cent or as high as 20 per cent. But there were two things it could say with certainty: the current figure for the proportion of gay people in the population is substantially understated and so is the figure for the prevalence of anti-gay sentiment.

In Britain, meanwhile, it looks like the battle is over. Gay couples can marry – following legislation driven by the Conservatives – and are protected from discrimination. Their parliament is starting to reflect the population. But gay rights groups now see attitudes as the final frontier – and that in a country that elected its first openly gay MP all of 18 years ago.

This is why for so many straight people, Saturday felt a lot like Independence Day. It’s why there is genuine puzzlement about the holdouts and their claims of a looming apocalypse. Without doubt, there are enormous challenges facing society, some of which relate to the ethical and moral use of reproductive technology.

But I’ll take bets that gay people are as divided about those as straight people. Attempts to place those challenges solely at the door of the gay population were not only provocative but cynical.

Enough damage has been done.

1 How one couple’s weekend away resulted in 30 Covid-19 cases
2 Taoiseach tells TD to ‘cop on’ over criticism of contact tracers asking about pubs
3 Netflix: 10 of the best new shows and films to watch in October
4 Covid-19: College students having break and middle-aged people in rural pub linked to large clusters
5 Miriam Lord: Government’s latest comedy of errors offers little to laugh about
Real news has value SUBSCRIBE