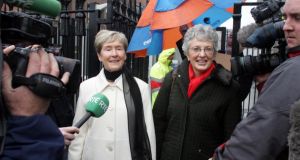 Ann Louise Gilligan and Katherine Zappone: Their case failed because the High Court ruled in December 2006 that the traditional definition of marriage was confined to opposite-sex couples. Photograph: Cyril Byrne/The Irish Times

The key issue in the forthcoming referendum is equality – equal rights to marry for gay and straight couples. Significant progress has been made in Ireland towards equality for gay people, after a very late start. Homosexuality was decriminalised 22 years ago. Since then, laws have been passed prohibiting discrimination on grounds of sexuality, recognising civil partnerships and making provision for the rights of children within gay families through the Children and Family Relationships Bill.

However, equality in marriage remains a critical civil liberties issue for this generation, not just in Ireland but internationally. Around the world, the movement for marriage equality has been gaining momentum in recent years. Since same-sex marriage was first legalised in the Netherlands in 2001, it has been recognised in 18 countries worldwide – including most of western Europe – and the majority of US states. In a few months’ time, the US supreme court will rule on the issue, following more than 60 judgments across American courts which have already recognised the right to marry for gay couples.

Things have moved on since October 2006, when I appeared as one of the legal team for Katherine Zappone and Ann Louise Gilligan in their courageous case seeking recognitionof their Canadian marriage. Civil partnership had not yet been legalised here, while in the US, only a small number of states recognised gay marriage. The case failed because the High Court ruled in December 2006 that the traditional definition of marriage was confined to opposite-sex couples.

Even then, this decision lacked logic. Given legal developments since then, it appears even more illogical. An argument that marriage must be confined to heterosexual couples because it “was ever so” amounts to circular reasoning. The truth is that the definition or meaning of marriage is not fixed in any society; it has changed and evolved over time.

Our traditional conceptions of marriage have changed substantially over the years, and tradition alone cannot form a rational basis for a law. It is not justifiable to deny gay couples the right to marry, just because few societies recognised same-sex marriage until relatively recently, so that marriage was generally thought of as something only engaged in by opposite-sex couples. After all, until relatively recently, homosexuality was considered by many to be a psychiatric disorder from which people could be “cured”. Happily, this view is now confined to history.

There is no rational basis for the denial of the right to marry for gay couples. The State does not generally interfere in people’s choices as to whom they marry. There is no prohibition, for example, on a black woman marrying a white man – because we recognise that differences between people based on ethnicity have nothing to do with their ability to make the long-term commitments to each other that lie at the core of marriage. The fact that two individuals who wish to marry each other happen to be members of the same sex, similarly, should not be relevant to the value we place on their long-term mutually committed relationship.

It would be profoundly illogical and unjust and would fly in the face the empirical evidence and the lived reality of many families in Ireland today to argue that same-sex couples should be denied the right to marry because of a prejudiced view that they are not suited to rearing children.

The institution of marriage has persisted through changed times because as human beings, gay and straight, we all seek the same things that marriage represents: love, companionship, intimacy, mutual trust and responsibility. That is why it is time to take the final step in the journey towards equality with our gay sisters and brothers, towards recognition of our shared humanity. Let’s take that step together by voting Yes to the marriage equality referendum.