It’s a national obsession – so where’s the great Leaving Cert book or film?

‘Surely by now it should be one of those themes that pop up all the time in Irish fiction, like bossy priests?’ 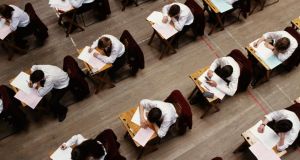 ‘When those 55,963 students – including the intrepid Ian – filed into their school halls to start English Paper One last Wednesday, for parents it launched the final stretch of two years of handholding, freaking, wrangling with schools, nagging, praying and forking out for grinds.’

News that a Limerick lad got to his first Leaving Cert exam on time thanks to a Garda escort has me flustered.

On the one hand, the fact that an extremely helpful taxi driver and guard cooperated to get 17-year-old Ian Fitzhenry to the exam hall after he missed his bus is obviously heartening news.

On the other hand, the fact that he reached the hall with only three minutes to spare – three minutes! – shows how a bit of bad luck could erase years of preparation.

Such a near miss is enough to send a parent like me into a dark room, trembling at the random cruelty of fate. To think two years of hard work could be undone by something as everyday as a missed bus and heavy traffic – it’s terrifying.And that’s not just two years of hard work put in by students. Make no mistake, the Leaving Cert is an all-family event. This year, news reports say that 55,963 students are doing the Leaving. This number is meaningless. The crucial statistic is: how many families are affected? Let’s see, if X is the number of exam candidates, and Y is the number of families who have one or more siblings taking the exam at the same time, then (X–Y) is . . . Okay, let’s just say 50,000-plus families are doing the Leaving.

When those 55,963 students – including the intrepid Ian – filed into their school halls to start English Paper One last Wednesday, for parents it launched the final stretch of two years of handholding, freaking, wrangling with schools, nagging, praying and forking out for grinds.

I asked a friend whose oldest child is up this year for a quick psychological assessment. She spoke of wild mood swings. Minute one: “It’s hopeless.” Minute two: “Work! Work is the solution! Work, work, work!” Minute three: “What will be, will be.” Minute four: “It’s hopeless.”

She was, of course, describing herself. The actual student? Chilled to the point of icing over entirely.

Another friend is doing a professional course that ends in November; not great timing, but, as she says cheerfully, at least she can keep the following seven months clear to “focus on the Leaving”.

She’s not one of those heroes who, having left school early, is sitting the Leaving in her 50s. She’s just an ordinary mum whose child was steered away from higher-level Irish despite doing well in the subject in the Junior Cert; a mum who had to plunge into an intense round of phone calls, meetings and lobbying before the school relented and moved the kid to the right Irish class. One massive victory under her belt, she remains on standby. Just. In. Case.

Crucially, parents are now firmly in their children’s corner when it comes to the Leaving. It was a different story in 1979, when I did my exams. Most parents I knew hadn’t done the Leaving themselves, they didn’t really get it, and they certainly didn’t act as our advocates when schools failed us. In my own case, when a group of us began teaching ourselves honours biology because the teacher seemed to have simply given up, our parents just shrugged and let us get on with it.

It’s impossible to imagine parents nowadays being so laissez-faire. Today’s parents know whose side they’re on: their child’s. We want our children to get into whatever third-level course they’ve set their hearts on, because we know they’ll meet soulmates there and might even achieve that elusive middle-class mirage: a career they enjoy. Our middle-aged brains can see the consequences if they fall short or, worse, slip out of education. It’s part of our job to make sure that doesn’t happen.

For my parents, the Leaving Cert pertained to a tiny elite, of which they were not part. Now the Leaving touches us all.

Given that the Leaving is such a huge milestone, I’m amazed it isn’t more of a cultural obsession. Surely by now the Leaving should be one of those themes that pop up all the time in Irish fiction, like bossy priests and drinking at funerals? No doubt there are stories that focus on the exam, but somehow I haven’t read them. Nor have I seen the Leaving explored in TV dramas or the stage. I do remember seeing one film – a short in the Irish language – about kids taking their Irish orals. That’s it.

The Leaving may be horrendous, but not so horrendous that no one wants to talk about it ever. Quite the opposite: for a month every year, it dominates the airwaves, affects the dreams of millions, controls the weather. But it’s an ordeal shared by just about every Irish person, and our culture could help us grapple with it.

We should all know poems about the Leaving, have read graphic novels about it, be humming songs about it. Our kids should be doing online games where their quest is to reach the exam hall despite zombies blocking their way.

As for Ian’s last-minute dash, to me it sounds like the perfect pilot for a sit com – or a scene from a horror movie.

Breda O’Brien is on leave