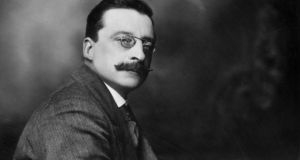 The movement known as Sinn Féin has taken a number of forms since its inception and the first to bear the name, which was established by Arthur Griffith in 1905, had as its basis a political model that came into existence in central Europe 150 years ago on February 18th. This political arrangement, known as the Ausgleich in German and the Kiegyezés in Hungarian, and which translates into English as “Compromise”, saw the establishment of the dual monarchy of Austria-Hungary.

Following 150 years of partial Ottoman control, Hungary came under Austrian Habsburg rule in 1699. In the “Year of Revolutions” (1848), the native Magyar majority overthrew Austrian rule but Russia came to Austria’s aid to restore the status quo. Following a long period of Hungarian passive resistance, and with Austria losing wars to France (1859) and Prussia (1866), the dual-monarchy arrangement emerged in 1867 whereby Hungary became independent in internal affairs but shared a common foreign and defence policy with Austria, with Franz Josef accepted as common head of state (but as king of Hungary rather than emperor of Austria).

As the Hungarian scholar Thomas Kabdebó, who has spent much of his life in Ireland, has pointed out, links between Hungary and Ireland go back to medieval times. In an early poem, Yeats described Ireland as “the Hungary of the West”. The Young Irelanders, especially John Mitchel and Michael Doheny, were particularly interested in the similarity between the two countries’ struggle for political freedom, and Arthur Griffith, perhaps the foremost nationalist journalist of his generation, read extensively in their writings, editing publications of their works during the first World War.

He revealed an interest in the Irish-Hungarian analogy as early as April 1899 in his United Irishman weekly. His extensive reading in 19th-century Hungarian history gave him a new perspective on Irish history. Practical-minded in everything he did, he read history for its political lessons. He was struck by the parallel he saw between Hungary, a small country linked with a great empire, and Ireland and believed that its history contained an important lesson for the Ireland of his own time. This led him to call, in October 1902, on Irish MPs to end their attendance at Westminster (because that implied recognition of English right to rule Ireland) and set up their own parliament in Dublin; in other words, to pursue what became known as “the Hungarian policy”.

He was asked by readers of his newspaper during 1903 to outline this policy in greater detail and he did so in a series of 27 articles, between January and July 1904, under the title “The Resurrection of Hungary”. The final article declared that the Act of Union was illegal and unconstitutional, that Irish MPs’ attendance at Westminster did not render it legal but was a “temporary acceptance” of it, misrepresenting the position of Ireland to the world and confusing the minds of its own people.

He also expressed the belief that the continuance of the Anglo-Irish connection in any form was not for Ireland’s good but he recognised “a large mass” of Irish people who felt that provided each was independent of the other and equal in status, the rule of a common monarch was acceptable.

The 27 articles were published in pamphlet form, under the title The Resurrection of Hungary, in November 1904 and sold 5,000 copies within 24 hours, a record in the Irish publishing trade that may still stand.

More than 20,000 copies were sold within three months of publication and historian Donal McCartney has described the pamphlet as “one of the seminal documents of modern Irish history”.

In advocating the so-called “Hungarian policy”, Griffith hoped to tread a middle way between what he regarded as ineffective parliamentarianism on the one hand and physical-force republicanism on the other, which he thought stood little chance of success. By maintaining the link of a common monarch, he also hoped to attract unionists. He argued that action must come from within Ireland itself and not from abroad at Westminster, and that action should take the form of passive resistance.

In a detailed speech at a convention in November 1905, Griffith worked out how the policy could be adapted to Irish circumstances. The speech was published afterwards in pamphlet form as The Sinn Féin Policy. There are various suggestions as to where he got the term Sinn Féin from but no doubt he was relieved to have found the Irish title, which not only sounded more native than the “Hungarian policy” but also summed up more appropriately his ideal of national self-reliance.

After the 1916 Rising, what might be called the second Sinn Féin party emerged with a more explicitly republican policy and a dual-monarchy arrangement was never tried, which was perhaps a pity as much future division and suffering might have been avoided had it been.