Hugh Travers’s ‘Hungry’ should be allowed to air 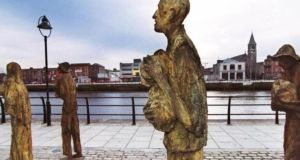 Hugh Travers: “I don’t want to do anything that denies the suffering that people went through”. Photograph: The Irish Times

After the appalling shooting at the offices of Charlie Hebdo in Paris, the simmering dispute concerning Hugh Travers’s proposed sitcom set during the Famine seems even sillier than before.

Yet the story does throw up teasing misconceptions about comedy and worthwhile questions as to whether any topic should be exempt from satirical examination.

The controversy was kicked off when, in this newspaper, Travers, hitherto best known for the play Lambo, announced his intention to write a comedy named Hungry for Channel 4. “I don’t want to do anything that denies the suffering that people went through,” the Irish writer said. “But Ireland has always been good at black humour.”

It took only a few days for the story to generate steam. The most heated fulmination came from the folk at Irish Central. Whereas The Irish Times focused on the writer, that publication – catering for Americans who think themselves Irish – immediately and inevitably interpreted the story as an attack by perfidious Albion. “British TV orders up a comedy series about the Irish famine,” the headline above Niall O’Dowd’s piece read. Just as Kim Jong-un seemed to regard The Interview, Sony’s recent film, as an effusion of the US state department, the commentators below O’Dowd’s article identified Hunger as a manifestation of “English” antagonism. One “Phil Mc” was, however, prepared to address the piece’s Irish origins. “Selling out your own,” he wrote. “That’s how many Irish get ahead. Just like the Capos [sic] in Auschwitz.” Just to be clear, Phil is, without having seen a second of Hungry, comparing Travers to the Jews who assisted in exterminations at death camps.

Would they make a comedy series about the Holocaust?Life is Beautiful

“Murder, genocide, people dying, retching with their faces green from eating weeds, their bowels hanging out of them – no passage of time will make that funny,” Coogan continued.

Indeed not. But Coogan, a wise old bird, must realise that to set a comedy amid historical tragedy is not to suggest that such tragedy is in itself amusing. There was much talk of Blackadder Goes Forth over the week. Of course, the parallels between the first World War and the Great Famine are of limited value. But they are certainly useful in addressing Tim Pat’s last point. Passage of time has failed to make the annihilation of millions amid viscera-soaked mud in any way funny either. The black humour derives from the absurd desperation of the conflict and (significant this, considering the current conversation) the complacency of the British regime.

Almost all historical catastrophes become less troubling to delicate sensibilities as time progresses. Nobody much minded about the depiction of the Black Death – “I’m not dead yet!” – in Monty Python and the Holy Grail. But the Famine was not just a biological calamity. Many still view it as part of the unfinished business between Ireland and the United Kingdom. Hence the raised hackles at Irish Central.

Thank goodness for common sense. After a torrid weekend, one satirist published a sketch positing how Travers’s sitcom might turn out. It made reference to Jonathan Swift’s Modest Proposal (which demonstrates beyond doubt that responsible humour can be drawn from starvation in Ireland) and included chastising of Queen Victoria.

The sketch wasn’t awfully funny, but it still offered worthwhile rebuttal to those arguing that any comic script on the Famine was inherently unacceptable.

Hang on? It seems that Niall O&#8217;Dowd of Irish Central was responsible. Rub your eyes. Wipe the screen furiously. It still proves hard to read the piece through the swells of irony gushing across O’Dowd’s clunking dialogue. What’s funny about the starvation of millions? Is this a fit topic for humour?

Oh well. “If it was just the potatoes that were affected, at the end of the day, you will pay the price if you’re a fussy eater.” Don’t complain to me about that last crack. Write to Alan Partridge.

1 A vegetarian and a non-drinker visit Ireland: here’s their verdict
2 Are there annual limits on inheritances or gifts to a child?
3 Miriam Lord: The left limbers up to woo Mary Lou
4 Leaders’ debate: For one dramatic moment, the Taoiseach is like a rabbit in headlights
5 52 places to go in 2020: Here’s where the New York Times says you should visit
Real news has value SUBSCRIBE