Diarmaid Ferriter: ‘Historians in tanks. Relatives in conflict. Taoisigh at loggerheads. Royals invited then uninvited. Poets aflame. And it is only 2015’ 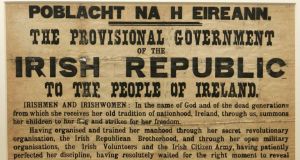 ‘One suggestion from the debate in Castlebar was that every house in the country should be issued with a copy of the 1916 Proclamation . . . They might be viewed as a reminder of the nobility of the aspirations to equality crafted by James Connolly and Patrick Pearse, or they might serve as a reminder of 100 years of broken promises and be given prominence at water charge protests.’ Photograph: Dara Mac Dónaill/The Irish Times

I have a strange vision of Easter 2016 in Dublin, involving historian Ronan Fanning at the helm of an Irish Army tank on O’Connell Street, passing the GPO, while the Minister for Foreign Affairs, Charlie Flanagan, stands bravely in his way to preach peace. The two men made for a somewhat awkward double act at the Fine Gael conference in Castlebar last weekend, as they communicated very different messages. Fanning was adamant there should be a “shameless celebration” of the centenary of the 1916 Rising, and “we should insist that whatever government will be in power must unwaveringly lead the nation at home and abroad in unabashed celebration of the seminal moment in the birth of the Irish Republic”.

In contrast, in a peace process reading of the centenary, Flanagan chose to emphasise the importance of reconciliation: “We cannot allow the centenary commemorations themselves to become a divisive issue”. He emphasised “quite frankly”, that there is “nervousness across many political representatives and community leaders in the North about the centenary”.

How are these two contradictory impulses to be reconciled? It would appear they cannot be and will not be. I was reminded of the words of Edna Longley: “Commemorations are as selective as sympathies. They honour our dead, not your dead.”

Evidence of that reality has already been provided by the sensible decision to take the ill-advised proposal for a British royal presence for the centenary off the table because it was clear it would be too divisive and that such a divisiveness would be the main story of 2016. By its nature, commemoration is divisive and if it is to be true to historical reality, it cannot but be; however, having the royals seemed to offer the prospect of a divisiveness too far. This is all about degrees of divisiveness.

By all accounts, the discussion in Castlebar was robust and the liveliest witnessed at the conference. Who says commemoration cannot be fun?

Minister of State Jimmy Deenihan insisted the centenary should involve “commemoration not a celebration” but announced proudly of Fine Gael, “as a party we have come from 1916”, a reiteration of Enda Kenny’s rhetorical slapping down of former taoiseach John Bruton last October for condemning the Rising.

Of course, were they to be issued in a new edition by the State, they could serve one of two purposes, depending on the receivers’ persuasions.

They might be viewed as a reminder of the nobility of the aspirations to equality crafted by James Connolly and Patrick Pearse, or they might serve as a reminder of 100 years of broken promises and be given prominence at water charge protests.

Or many might just find their way into the recycling bin given that there are, according to the last official count, 1,994,885 dwellings in the State, and not all the dwellers will want to dwell on 1916.

John A Murphy, the redoubtable Cork historian and former senator who has made a number of lively interventions in the commemoration debate, also jumped into the fray this week to tell us in a letter to this newspaper that the dates for our commemorative focus are misguided; that the State derives, not from 1916 but from the Anglo-Irish Treaty settlement a few years later. Good luck with that one, John A.

I presume many of the relatives will still mobilise in 2016, but there could well be a countermand order to that mobilisation if these kinds of disputes continue.

Poets are also mobilising; Paul Durcan’s soon-to-be-published book The Days of Surprise promises a contribution on the 1916 commemoration and he is unlikely to be neutral on the matter given the flavour of his social and political analysis to date.

And it is only 2015. Were he here to witness it, Flann O’Brien would have a field day.