Head to head on water charges: Is it time for the public to pay up? No

Water meter protests grow on a daily basis. More and more buses are being booked to come to the protest on December 10th 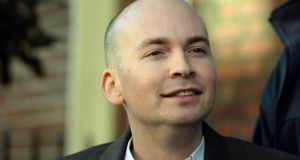 Paul Murphy: ‘This attempt to cut across the social movement has not worked. Attendances at anti-water charges community meetings continue to snowball.’ Photograph: Cyril Byrne / THE IRISH TIMES

Underneath the statue of Jim Larkin on O’Connell Street is an inscription which dates back to the French Revolution, “The great appear great because we are on our knees: Let us rise.” That advice has been heeded spectacularly in the past months in the explosion of a major social movement against the water charges.

Working people, unemployed people, pensioners and young people all rose together on October 11th, with 100,000 flooding the streets of Dublin. On the same day, the people of Dublin South West elected me to the Dáil. Three weeks later, up to 200,000 came out across the country in the biggest protests in 30 years.

The result is a political earthquake, where the Government, instead of appearing great, appears terrified. With big sticks in one hand, and baby carrots in the other, they have desperately attempted to appeal to “reasonable people” to accept their amended water charges.

One big stick has been the campaign of demonisation of anti-water charges campaigners. Another is the excessive use of force by gardaí at water meter protests and the threat of jailing that now hangs over three activists in Dublin.

Yet another is the incredible threat to have councils increase the rent of council tenants and to turn private landlords into debt collectors for Irish Water. Revealingly, the Government has not yet dared to introduce legislation for either of these measures.

Their baby carrots are the delay of bills for three months, the capping of charges until 2019 and a promise of a plebiscite in the event of any future proposed privatisation.

This attempt to cut across the social movement has not worked. Attendances at anti-water charges community meetings continue to snowball.

Water meter protests grow on a daily basis. More and more buses are being booked to come to the protest on December 10th. The reason is that while the Government pretended to listen, it did not hear. When people chanted “No Way, We Won’t Pay”, the Government heard “What do we want? Clarity!”

The experience of the bin charges shows that prices will only go up and privatisation will follow, regardless of the Government’s empty promise of a plebiscite, which can be undone by any future government. The argument that water charges are needed for investment in water infrastructure should be met with derision.

This Government and those before it have refused to invest, while anti-water-charges campaigners have been to the fore in arguing for investment. The question is how it is paid for – through this regressive home tax, with multimillionaires paying the same as unemployed people, or through central and progressive taxation?

Wednesday, December 10th, will be a key date. Rarely in this State has a protest assumed such importance. If tens of thousands again flood the streets, this time during a week day, the Government’s strategy of appealing to “reasonable people” will lie in tatters. Given that it has staked its future on holding the line on water charges, a massive demonstration can potentially destabilise the Government and accelerate the process of it being brought down.

No action is likely to be taken against non-payers in the lifetime of this Government – as the penalties for non-payment of €30 per year for single adult households and €60 for multiple adult households only come into effect in the middle of 2016. Massive non-payment, together with major protests, will ensure that water charges will be the decisive issue at the next general election and political parties can be forced to promise to abolish them.

The Taoiseach has accused those behind the protests of having a “sinister agenda”, saying that this is not about water charges.

It is certainly not just about water charges for the majority protesting. This has become the lightning rod conducting the accumulated anger and discontent over six years of cuts and taxes to pay for bankers and bondholders.

Above all, this issue has become about working-class people discovering their own power. After defeating water charges, they will not kneel down again. For the establishment, that is the scariest thing of all.

5 Davy Q&A: Who was involved, what happened and what is the likely fallout?