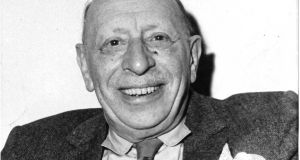 It’s mostly forgotten now, more than half a century on, but John F Kennedy was not the only international celebrity to visit Ireland in June 1963.

The great composer Igor Stravinsky was here too, just ahead of him. And although his fame may not have been quite so widespread, the event made a huge impression on aficionados, including The Irish Times music critic, who likened it to the visit of George Frederic Handel in 1742.

Stravinsky’s week-long stay was marred by the imminent demise of his friend, Pope John XXIII, who died within 24 hours of the former’s arrival.

But between conducting rehearsals, the devout composer nevertheless took time out for some sightseeing.

When the unnamed Irishman’s Diarist of the day went looking for him at his Dublin hotel, a minder told him Stravinsky was down the country somewhere, and that even when he returned would be “avoiding you people”.

This last bit wasn’t true. When the paper sent a proper journalist, later, Stravinsky did grant an interview, in which he rhapsodised about the local scenery (he’d been to Clonmacnoise). “Magnificent,” he declared. “Green and stones – stones and green.”

He went on to confess, with exaggerated shame, that he had never been to Ireland before (“Can you imagine? Never!”), even though he was 80. It was all the more remiss, he said, because he had developed a deep interest in things Irish back in 1920, while living in Paris, “when events in your country became very historical”.

He’d read a lot about it at that time. Now he had only two free days to see it: “Not enough for a very important country.”

This may have been more than mere flattery. After all, he had seen little of his own homeland either since the first World War – being abroad at the time of the revolution and thereafter exiled as long as Stalin was alive.

Stravinsky was a revolutionary in the musical sense. In the political, he was anything but, detesting the Bolsheviks, as they did him. He had finally returned to Russia only in 1962. In that light, Ireland was respectably high on his to-do list.

The composer’s reading habits aside, Paris 1920 was also the scene on a now-infamous event at which he might have learned more about Ireland, had he wished, and from an expert.

He and James Joyce were among the guests then at what has become known as the “modernist dinner party from hell”, organised by a wealthy British couple on the opening night of a Stravinsky ballet.

Alas, Joyce was not at his best, arriving drunk, feeling awkward, and apparently falling asleep for a while at the table.

Although guests also included Picasso and Diaghilev, most attention has since focussed on the bilateral talks between Joyce and Marcel Proust. The only meeting of the two men vying for paternity of the modern novel, it was a social disaster.

As pieced together later by various witnesses, including a sobered-up Joyce, it began with a brief discussion of “truffles”, moved on to literature (equally brief, since both men claimed not to have read the other), then to women (another misfire, with Proust mentioning various countesses, and Joyce preferring to discuss chambermaids).

Finally, they hit on common ground – bodily ailments. And they might have explored this theme further back at Proust’s apartment, to which some of the party adjourned, had not the Frenchman insisted on his driver bringing Joyce straight home.

Oh well. In the reported exchanges involving Stravinsky, Proust did not fare well either. When he expressed admiration for Beethoven, the Russian replied: “I detest Beethoven.”And when Proust tried to recover by mentioning particular works he thought might be acceptable, Stravinsky declared these “worse than the others”.

Happily, Stravinsky also knew the other great Irish literary emigré in Paris, and they also had dinner, at least once, more successfully.

When they met again in 1962, Stravinsky embraced Beckett like a long-lost friend, offered to write music for any opera the Dubliner might attempt, and later sent a case of Sancerre to his flat. The charmed playwright responded by sending several bottles of Jameson to the whiskey-loving Russian.

Like Ireland’s other star visitor of June ’63, Stravinsky promised to return soon. He never made it, either. But his host from that occasion, the Radio Éireann Symphony Orchestra, survives. Now the RTÉ NSO, it will be central to a Stravinsky “blitz” at the National Concert Hall tonight and tomorrow (nch.ie).

1 Coronavirus: 200 new cases reported in largest daily total since May
2 Anne Doyle: ‘Depression? I know what it is, and it’s a b*tch’
3 Gardaí investigate after woman pushed into Royal Canal following alleged racial abuse
4 36 hours on Northern Ireland’s Causeway Coast: ‘Everyone is having a wild time’
5 Chairman of Fáilte Ireland resigns after it emerged he is holidaying in Italy
Real news has value SUBSCRIBE