Food for thought – An Irishman’s Diary about James Joyce, ‘The Dead’, and Ada Rehan 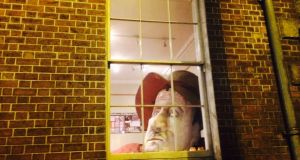 “Alas, my knock on the door of No 15 went unheard, except apparently by a giant papier maché head of Joyce that leered at me from a ground-floor window”

Rain was general all over Ireland on Wednesday night. It was falling on every part of the dark central plain, on the treeless hills, falling softly upon the Bog of Allen and, farther westward, softly falling into the dark mutinous Shannon waves. Or so I imagine.

It was certainly falling on Dublin’s Abbey Street when I dropped into Wynn’s Hotel during the annual Feast of the Epiphany dinner in honour of James Joyce’s immortal story, The Dead.

A fundraiser for Sweny’s Pharmacy, where Leopold Bloom bought his soap and which is now a micro-museum and performance space, the banquet was candle-lit, with a roaring fire. It looked so cosy I didn’t want to face the wintry streets again. But I was on a mission, so I did.

In a nice touch, they screened half the movie beforehand, pausing it as Gabriel Conroy was about to speak. Then the real-life guests had their meal – all proceeds to the Mendicity Institution – before the film resumed, with Gabriel’s after-dinner speech and the elegiac denouement.

It was with even greater reluctance that I left Arthur’s.  But no January 6th would be complete without a visit to the House of the Dead itself, where I knew yet another banquet was in progress.

If I waited long enough, I guessed, somebody would let me in. But then I remembered poor Michael Furey, who hastened his demise by lingering under people’s windows in the rain. So not wishing to join him soon, I went home.

We’ll return to Usher’s Island in a moment. But first a segue on the theme of death and dinner, for the indelicacy of which I apologise in advance.

It comes courtesy of a once-famous Irish-American, Ada C Rehan, who died 100 years ago today. At her peak, she was the greatest performer on the New York stage, admired by Oscar Wilde and George Bernard Shaw.

And there was a Joycean joke in her stage-name, because she was really a Crehan, from Limerick. Like Bloom, however, she was prone to being misspelt. Someone billed her as “Ada C. Rehan” once and it stuck.

A career in drama may have been inevitable, given her origins. Her father and mother met when the former was in jail for smuggling and the latter was the prison matron’s daughter. But there was an even more interesting story in the family background.

Finally, they made a grim decision. A lottery was held, wherein one of the unfortunate cabin boys was first prize. The rest ate him for (Christmas) dinner. By the time the ship was rescued, two other crew members had met the same fate.

Years later, Jack London wrote a fictionalised version, wherein the horror is exacerbated by stage-Oirish dialogue. For that alone, you may need a stiff drink after reading it. And by a happy chance, I know where you can get one.

These are being bottled in time for Joyce’s birthday (February 2nd), and a related exhibition, as a House of The Dead special. Each bottle will come in a tasteful, coffin-shaped box. And although, at €250, the price might seem stiff too, the cause is noble.  We’re talking, after all, about the water of life. The hope is that, à la Tim Finnegan, it will help revive the building.