Fintan O’Toole: Us and them – the two faces of migration 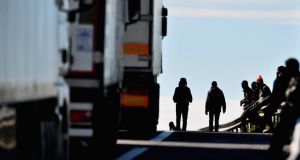 Migrants try to board lorries bound for the United Kingdom in Calais this week. Photograph: Jeff J Mitchell/Getty Images

Migration is always a matter of perspective. Or rather of two perspectives.

When our own beautiful young people fall from a collapsing balcony in Berkeley, they are Us – real, complex human beings with lives and hopes and dreamed-of futures. When two South African men fall into a London street from the undercarriage of a plane on which they had apparently stowed away, they are Them – strange, shadowy, desperate figures.

We see dark bodies running towards trucks in Calais. We see stunned, wraith- like people emerge from rickety boats in the Mediterranean. But we see them out of the corner of our eyes. To look at them full on, as we look at our own children, is both unbearable and inconvenient.

If they catch our eye, they become human. That swarthy, feral-looking man running from the margins of the Calais motorway turns out, when interviewed by Channel 4 News, to be a Syrian teacher of English literature whose favourite play is Shakespeare’s Antony and Cleopatra. He’s uncomfortably like Us.

There is another double perspective at work here As well as Us and Them, there is the long and short. In the long-term, migration is just what happens in human history – people move, sometimes under the pressure of war or invasion or famine or drought; sometimes because there seems to be a better life in that other place; usually from some complex interaction of push and pull.

It has always happened and it always will: our species began its mass movement out of Africa at least 60,000 years ago and large groups have been migrating ever since. There is nothing unusual about the current wave of migration from Africa and the Middle East towards the richer, safer countries of the West.

In the short-term, however, these movements are often experienced as threatening and disruptive. Groups that will become, over a few generations, fully integrated parts of society, begin as sinister strangers.

The wave of poor Irish Catholic migrants who washed over the United States in the second half of the 19th century was sure to drown America’s democratic values in ignorance and superstition. The Jews who fled pogroms and poverty in eastern Europe in the same period were nasty interlopers whose alien religion threatened Christian civilisation.

There has always been a tension between the long-term inevitability of migration and the short-term fear of being flooded, overwhelmed, taken over.

Those tensions are especially stark at the moment. Reports this week that Minister for Justice Frances Fitzgerald went to Cabinet with her concerns over an alleged influx of just 700 migrants show how detached Ireland is from the unfolding humanitarian crisis. Millions have been displaced by war and social breakdown across the Middle East and north Africa, much of it fuelled by catastrophically reckless western interventions.

Paradoxically, though, the very scale of this disaster closes down compassion. At worst, it creates a fear of being “swamped” – what will happen if all of these people manage to get into western Europe? At best, it generates a sense of helplessness; what can usefully be done in the face of such enormous misery?

Hence, in the last week alone, the success of the far-right People’s Party which came second in the Danish general election on a promise to reintroduce border controls, as well as the Hungarian government’s plan to construct a 4m-high fence along the full 175km length of its frontier with Serbia.

Hence, too, the hand-wringing that has characterised the broader European Union response, with agreement to relocate 60,000 migrants reached only reluctantly and after fractious negotiations on Thursday.

Neither the panic nor the sense of helplessness constitutes a real response. But what would such a response look like? In the short term, it would look pretty much like practical compassion. Every one of the 38 million displaced people is a man, woman or child just like us and our children. They’ve done exactly what each of us would do – try to escape intolerable conditions and get to somewhere better. They’re not waves or floods or aliens – they’re us.

A serious, co-ordinated international strategy to help these people, wherever they are, is the least that common sense and common humanity demands.

But surely that’s happening already? Not on anything like the scale that’s required. The UN’s strategic response plan looked for $6 billion (€5.3 billion) to stabilise the situation of refugees in Iraq, Libya, Palestine, Syria and Yemen in 2014. It got less than half of that. The appeal for Libya, which has been a major route for migrants taking to the Mediterranean, raised less than 2 per cent of the very modest $35 million (€31.2 million) that was sought. These programmes may be sticking plasters, but if you’re bleeding, a plaster is much better than nothing.

Finally, the refugee crisis has to be understood as a symptom, not a disease. It can’t be solved in a world like the one we currently inhabit. So long as there are gross inequalities between the richer and poorer regions, and so long as those in poor countries can’t see prospects of life getting better where they live, mass migration is not only rational but unstoppable.

Uncontrolled globalisation, climate change and neo-conservative interventionism have all exacerbated the inherent tensions of an unequal world. Migration is the world’s way of reminding the West that it cannot distance itself from the human catastrophes it has unleashed. There is no “over there” anymore.