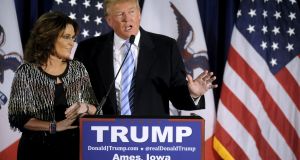 Sarah Palin and Donald Trump: if the Republican candidate is elected president, the US could lurch towards a weird mixture of unilateralism (kick their asses and ask questions later) and isolationism (withdrawing into a nativist fantasy world with no Mexicans, no Muslims and no international obligations). Photograph: Mark Kauzlarich

Could this be the year of the unthinkable? Let’s be apocalyptic for a moment and consider six things that just might happen this year:

1. The European Union could be plunged into existential crisis. The EU is already weaker than ever before, split north-south by the euro-zone debt disaster and east-west by the emergence of autocratic governments in Poland and Hungary. If, as seems entirely possible, the EU ends the free movement of peoples within its borders, the motor of “ever- closer union” seizes up.

2. The United Kingdom could be impelled towards collapse. If England votes to leave the EU while Scotland, Wales and Northern Ireland vote (as they will) overwhelmingly to stay in, the UK may not survive. The Scottish National Party would call a second referendum on independence, this time not with the risk of being thrown out of the EU but with the demand to stay in.

3. The president-elect of the United States could be Donald Trump or another far-right populist such as Ted Cruz. The US will lurch towards a weird mixture of unilateralism (kick their asses and ask questions later) and isolationism (withdrawing into a nativist fantasy world with no Mexicans, no Muslims and no international obligations.) Its days as the supposed cornerstone of world order will be over.

4. The Chinese Communist Party, arguably the most successful political organisation on the planet over the last 25 years, faces a rapid loss of authority, with a consequent emergence of serious political and social instability. The party engineered a vast economic and social revolution while maintaining a monopoly on power. But all of this has been based on an implicit contract with the people: we get the power, you get rapid economic progress. If that progress goes into reverse, the contract is invalid. Cracks in the facade of control could open quite suddenly.

5. Spain could unravel. If Catalonia votes for independence, one of Europe’s largest countries will break up.

6. All of this could take place against the backdrop of a global economic recession that reminds everyone of what we learned in 2007 and then forgot again: that feral capitalism is not just in crisis, it generates crises. After the great banking debacle, there was a sudden awakening to the reality that neoliberal globalisation is inherently unstable. And then the world went back to sleep again. But a second global crisis in a decade could open the ideological Pandora’s box – what will take the place of the dominant economic ideology?

All this, of course, without even mentioning other forces of instability, from Islamist terrorism to climate change.

What’s going on? One could argue, rightly, that each of these potential shocks is different and that it has its own internal dynamics. But there is a common thread: the problem of political authority. And that problem in turn has common roots. At the heart of the radical instability of global political arrangements is a fundamental contradiction between politics and economics. Politics tells people they are equal; economics is creating ever more grotesque inequality. The market is making an increasingly loud mockery of the idea that holds a modern political entity together – the belief that everyone within it has the same goals and interests.

The rhetoric differs widely and history and culture exacerbate those differences but whether you’re in China or the US or Europe, you’re told that you are equal to everyone else. Globally, popular culture is more egalitarian than it has ever been before. But everything you see around you tells you that this is a lie.

Big political entities that once seemed immutable are now in question because they cannot articulate in any coherent way a project to close the gap between what politics says and what the economy does. That project is social democracy and until it becomes thinkable again, nothing is unthinkable.