The meaning of the Lockout

At twenty to ten on the morning of Tuesday 26th August, 1913, the trams stopped running. 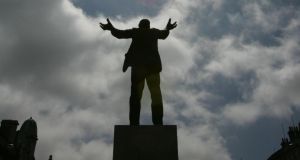 Striking conductors and drivers pinned the Red Hand badge of the Irish Transport and General Workers’ Union on their lapels and abandoned their vehicles . . .

In the social and political turmoil of Ireland’s decade of revolution from 1912 to 1922 several great narratives about the coming shape of the country played out in large movements outside the tired arena of parliamentary politics. Nationalists, feminists, unionists, socialists . . . each in turn staked claims, with greater and lesser ultimate success, and each contributed in a distinctive way to the shape of modern Ireland.

In August 1913, taking on 400 employers under William Martin Murphy, the workers of Dublin, led by James Larkin and the Irish Transport and General Workers Union, engaged in a battle for union recognition and against the horrendous living conditions they endured in the poorest, yet second, city of the British Empire. It would see them also pitched against a brutal partisan police force, strike breakers – and real hunger for their families– for four and a half months.

In retrospect we can also see in those months what its chronicler Padraig Yeates has called “the nearest thing Ireland has ever had to a socialist revolution”, a laboratory experiment when workers’ industrial muscle might demonstrate what leaders such as Larkin and James Connolly hoped in vain was in capitalist Ireland, their now decisive social weight.

Syndicalism, a radical trade unionism based on the sympathetic solidarity strike, saw such militant action as a weapon with which not just to confront employers but also to forge revolution, and it was as disconcerting to traditional union leaders as to employers. It was probably the only way in which the ITGWU’s easily replaced, unskilled and casual workers could hold bosses to account. But in the end it depended on the extension of the “blacking” of Dublin goods throughout Britain by conservative-led unions that would not be forthcoming.

In the end Connolly would describe the dispute as a “drawn battle”, despite the mostly humiliating terms on which most of those who returned to work in January 1914 did so. But the ITGWU, now Siptu, and Irish-based unions survived and went later from strength to strength, their place in the workplaces guaranteed. The struggle for union recognition is far from over, however, particularly in the casualised service sector and new-technology industries. And Connolly would understand that labour alone could not transform Ireland, throwing his weight, and that of the Citizen Army created to defend the striking workers, behind the great looming project of the decade, the Easter Rising.