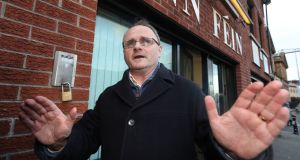 The resignation of Sinn Féin MP Barry McElduff is a welcome but belated recognition that the disrespect shown to the victims of the IRA’s Kingsmill massacre was unacceptable in a civilised society. Photograph: Niall Carson/PA Wire

The resignation of Sinn Féin MP Barry McElduff is a welcome but belated recognition that the disrespect shown to the victims of the IRA’s Kingsmill massacre was simply unacceptable in a civilised society.

The pity is that McElduff and Sinn Féin had to be shamed into doing the right thing after an initial response that compounded the problem rather than resolved it. McElduff has insisted repeatedly that his insult to the victims of the Kingsmill massacre and their families was inadvertent and that he would never have knowingly done something so hurtful.

Even accepting this at face value, there is no excuse for the way Sinn Féin responded to the hurt felt by the families of the victims. The three-month suspension from the party amounted to little more than a political slap on the wrist to McElduff. That initial response was described by the incoming party leader Mary Lou McDonald as “appropriate and proportionate” but it was clearly neither of those things, as yesterday’s resignation confirmed.

An emotional interview with Alan Black, the sole survivor of the massacre, broadcast on RTÉ radio on Sunday, probably accelerated McElduff’s decision to resign but the political pressure to do the right thing was already becoming unstoppable.

The controversy has come at a difficult time for Sinn Féin, with the party in the throes of a transition from the 30-year leadership of Gerry Adams to that of McDonald. There had already been some evidence of tension between the ambition to become a normal party of government in the Republic and the party’s unswerving public loyalty to the campaign of violence waged by the Provisional IRA up to 1997.

The McElduff tweet stirred up memories of one of the most shocking acts of violence carried out by the IRA. The question now is whether his resignation will serve to mitigate the insult to the victims. Putting a credible distance between the actions of the past and the current political strategy of Sinn Féin is a greater challenge.

The episode may ultimately serve some purpose if it encourages Sinn Féin to adopt a more realistic approach to the next round of talks with the Democratic Unionist Party (DUP), which will be the last chance for the restoration of the powersharing institutions at Stormont.

Both parties have made foolish mistakes over the past 12 months which fuelled the already serious level of tension between them.

DUP leader Arlene Foster has been making conciliatory noises in recent weeks. If the political setback endured by Sinn Féin over the McElduff affair prompts a little soul-searching in the party and results in a more conciliatory approach to the next round of talks then something good may be salvaged from the affair.