Video: Mark Hennessy and Cliff Taylor of the Irish Times reflect on Brexit and its historic implications. 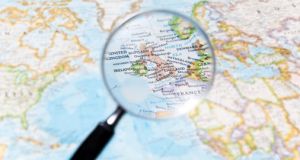 ‘Dare to dream that the dawn is breaking on an independent United Kingdom, ” Nigel Farage boasted this morning. Dream on. The truth is that the shocking decision of the UK to leave the European Union, genuinely bewildering to its friends and allies across the Irish Sea and the continent, will leave the kingdom neither independent nor united. It will be poorer, more isolated and less influential.

Our neighbours have inflicted a deep wound on their country, economically and politically. And they may well have set in train its disintegration as Scotland and Northern Ireland demand that their expressed preferences be respected. They have dealt a seismic blow to the long-term viability of the EU – around Europe the forces of euroscepticism and xenophobia have received a perhaps irresistible boost. They have also almost certainly plunged not only themselves but Europe into recession – the swift and sudden response of the markets bodes ill.

The EU has been increasingly weighed down by failures to deal fully with a succession of crises, from the 2008 financial collapse to a resurgent Russia and the massive influx of migrants last year. Yes, we must listen to what British voters and others are saying about that weakness and undoubted failings of its democratic structures. Yes, we too must commit to far-reaching reform. But that is because the majority of our peoples still regard the union as part of the solution, an essential part of the solution. What we cannot and will not accept is the central Leave contention that the EU is the problem.

There is a huge irony to this sorry decision. Britain’s assertion of its apartness and otherness from Europe is actually the expression in the UK of a very European phenomenon – indeed, arguably, global – a political tidal wave that has in the wake of the economic downturn swept across all our states. It has variously taken the form of a virulent anti-politics politics, of euroscepticism, of xenophobia, of islamophobia... It feeds on fear, deprivation, and prejudice. And on success – France’s Marine Le Pen and the Netherlands’s Geert Wilders will be invigorated and have already called for more national referendums. Polls show they have now a growing chance of producing similar results. In European capitals there is a real sense of fear that the whole great peace project of European construction is in danger of unravelling.

For Ireland, of all remaining member states, the challenge ahead is particularly acute. The threat to our strong trading relationship both across the Border and the Irish Sea should not be underestimated – the Republic will now be the external border of the Union, responsible for policing and taxing its trade across that border. The free travel area which Leave campaigners have promised us will remain may also, however, find itself falling foul of zealous new UK curbs on migrants from the EU. In some form a return of little lamented border controls is inevitable. That alone would set back the coming together of the two parts of this island which has been such an important dividend of the peace process.

To tackle such challenges Ireland will almost certainly have to engage in special pleading with our European partners to seek approval for the continuation of a unique bilateral relationship with a non-member with specifically tailored rules to facilitate those historic ties. A happy outcome is by no means a given, but our partners’ generous past recognition of the particular challenges of our peace process – apparently quickly forgotten by many Northern voters – would suggest a willingness to hear our case.

1 Covid-19: State moves to Level 5 for six weeks with hopes of ‘meaningful’ Christmas celebrations
2 Life under Level 5: What will the next six weeks look like for Ireland?
3 Bill that overrides UK’s Brexit deal denounced in House of Lords
4 High levels of microplastics in infant-feeding bottles released during formula preparation
5 Fintan O'Toole: System for making decisions on pandemic doesn't work
Real news has value SUBSCRIBE