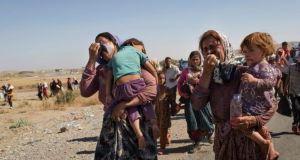 Iraqi Yazidi people fleeing IS in August 2014. More than a thousand women and girls were kidnapped. Younger girls were shared out among fighters, older women murdered. One mass grave held the bodies of around 80 women, all apparently over the age of 40. (Adam Ferguson/The New York Times)

Kurdish forces announced last Friday that they had driven Islamic State out of Sinjar, a town of some 40,000 citizens on the Syria-Iraq border which had been held by the fundamentalist group since August last year.

Had IS not launched its attack on Paris a few hours later, Sinjar would surely have made headlines in western media again.

The plight of the Yazidi people of Sinjar distressed and angered millions across the world last year. As IS militants stormed the city, tens of thousands fled. Footage of up to 50,000 Yazidis huddled on the surrounding hills, waving in supplication to clattering helicopters overhead, led news bulletins for days. Food drops and the opening of channels towards the relative safety of Kurdish-held territory eventually eased the urgency of the situation.

Since last Friday, we know more of what befell those who didn’t escape. Many of the reports remain to be confirmed. But the picture consistently painted is as appalling as any can have imagined.

More than a thousand women and girls were kidnapped. Younger girls were shared out among fighters, older women murdered. One mass grave held the bodies of around 80 women, all apparently over the age of 40.

What phenomenal malignity could prompt such evil?

Perhaps a clue can be found in Numbers 25, wherein Moses gives the Israelites a tongue-lashing for failing to obey the will of God after crushing the Midianites. All captured Midianite men had been put to death, right enough, but, Moses noticed, many women, girls and boys had merely been taken as booty, which was a sin.

At his instruction, all the boys and those women who were not virgins or who had passed their sexual sell-by date were slain forthwith. The younger female virgins were distributed among the fighters.

Like the Israelites then, the IS now is doing God’s will.

It isn’t only in Islam that orders from the Almighty can still sanction murder in modern times. In 2011, the (British) Independent reported on Israeli planning for that year’s killing spree in Gaza: “One soldier said an army rabbi had [used] ‘expressions such as no pity, God protects you, Everything you do is sanctified’.

“Leaflets distributed at military synagogues had stated that ‘the Palestinians are like the Philistines of old, newcomers who do not belong in the land, aliens planted on the soil which should clearly return to us.”

IS has a detailed running-order for the countdown, based on the apocalyptic texts of Islam. The infidel armies will come from the West and set up camp at Dabiq, near Aleppo. Here, the armies of Islam will meet and defeat them.

However, an anti-Messiah will come at the head of a huge army from Iran and lay waste to the caliphate’s forces, until only 5,000 remain, corralled in Jerusalem with no means of escape. At which point Jesus will appear in the nick of time, drive a spear through the anti-Messiah and lead the Muslims to final victory.

No great imaginative effort is needed to relate this scenario to contemporary events.

Well, it could be IS had gotten it wrong, Cerantonio conceded. But, “the Prophet said that one sign of the imminent arrival of the End of Days is that people will for a long time stop talking about the End of Days”.

Even the most sceptical will admit that, as proofs go, that has the authentic ring of religion about it.

The point is not that religious ideas cause war, or have caused this particular war. It is to say that to refuse to acknowledge the religious basis of the beliefs of those who attacked Paris last week is to refuse to face facts. The evil of IS is rooted in religion.

1 Covid-19: Museums, cinemas, hairdressers expected to reopen next week
2 Bloomberg ranks New Zealand top in fight against Covid-19 - but how did Ireland fare?
3 Coronavirus: 226 new cases and 6 further deaths reported in the State
4 The beginning of the end: 10 things to know about Covid-19 vaccines
5 How to gift your child a house deposit . . . tax free
Real news has value SUBSCRIBE