Donald Trump’s wall is a medieval concept not worth revisiting 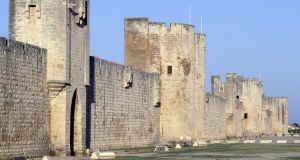 Gates and towers in the ramparts of Aigues-Mortes in France – the presence of stone ramparts reinforces a perpetual sense of threat. Photograph: DeAgostini/Getty Images

In these febrile times, it appears that borders are back in fashion and walls are very much in vogue. “We are going to build a great border wall to stop illegal immigration,” said Donald Trump in his grimly dystopian Republican convention speech last week, reiterating his promise to erect a fortification along the US-Mexico border.

“Build the wall,” the crowd chanted in return, giddy at the prospect of this construction project and all it represents.

At this moment, the structure or edifice standing between the tribal us and the threatening other has developed a particular resonance – clearly delineating the space between “them” and “us” has become a winning political philosophy once again, and in this strain of virulent nativism, a wall between Mexico and the US and even the white cliffs of Dover stand as potent symbols of proud nationhood.

But walls and borders don’t just keep “others” out, they also keep “us” in.

It is a glorious time-machine of a place, a town-sized museum. At the end of every street you can see the imposing stone in the distance, glinting in the bright sunshine. At crossroads, with the ramparts visible on all four sides, you are particularly aware of being enclosed, of the boundaries surrounding you.

While walking the ramparts, it struck me that medieval walled cities offer a useful metaphor for understanding the obsession with walls and borders that features in so much of the nationalist rhetoric in our political discourse.

In medieval times, walled cities were a sensible urban design, offering security and organisation. But the sense of security offered by the walls comes at a price – the presence of stone ramparts reinforces a perpetual sense of threat.

Outsiders are not just people on the other side of the wall, but almost by definition they must be interpreted as threatening – their location makes them so. Living inside the walls implies a permanent defensive posture.

That posture invariably informs your identity – your sense of self is determined by your position in relation to the wall, and by a tribal affiliation with the other people on the same side of the wall as you.

The flip side of the security offered by living inside the wall, of course, is the lack of freedom – going beyond the walls of the city is risky, and requires permission. Whoever controls the walls effectively controls everything inside the walls too, and justifying that authority requires a constant reinforcement of the sense of danger waiting just outside.

Understanding that dynamic is useful in trying to interpret the current wave of nativist populism washing across the US and Europe, with Trump and Farage, as well as the likes of Marine le Pen and Geert Wilders, invoking the risk posed by the “barbarians at the gates”.

It is facile to suggest there is nothing to be afraid of, out there beyond the walls, but the sense of anxiety is out of all proportion to the risk.

We are living in what might be termed “the age of ressentiment”, which is much more than just the French word for resentment, although there is no shortage of resentment around.

In moral philosophy, ressentiment can be summarised as the way in which one person or group directs anger and hostility towards another group that it blames for its internal feelings of frustration and inadequacy.

Medieval walled cities were, in a sense, the nation state of their day, but in the end, we outgrew them – the walls were too limiting, the security they offered no longer worth it. They constrained growth, both literally and economically, hindered trade and above all restricted the movement of people, thereby limiting the flow of ideas that leads to progress.

Aigues-Mortes is a lovely place to visit, but it doesn’t represent the future – there’s a reason “medieval” is a synonym for archaic and regressive.

These are worrying times, but if there is cause for optimism, it is the fact we don’t want to go back to living in walled cities.

Likewise, we will outgrow the nationalistic desire for walls and borders in the long run.

But we need to be very wary of politicians who wish to build those medieval walls around us once again.

1 Covid-19: NPHET member denies trying to ‘scare people’
2 The more London’s lockdown eases, the clearer the crisis becomes
3 ‘My rent here is so low it’s a joke’
4 ‘Sad day’ for House of Ireland as tourism retailer goes out of business
5 Is Kanye West’s White House bid genuine or a publicity stunt? Or could it be a bipolar episode?
Real news has value SUBSCRIBE