Donald Clarke: Irish Oscar nods were due to great expectations

Crew from Irish productions Room and Brooklyn will be getting ready for Oscar night as they get nods in a number of categories. Video: Academy Awards 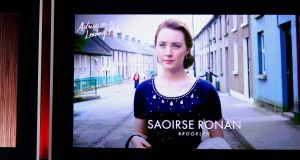 Saoirse Ronan is announced as a nominee for best actress at the 88th Academy Awards nominations ceremony in Beverly Hills, California, US. Photograph: Paul Buck/EPA

Okay, it’s nice to have got that out of the system.

We have had a chance to breathe after absorbing the astonishing news concerning Irish success at the Academy Award nominations.

Is it, perhaps, time to remove the flag from our shoulders, set aside vulgar patriotism and consider the results in civilised fashion?

There is no question that the announcement on Thursday constituted unexpectedly good news for the Irish film community.

John Crowley’s Brooklyn took an astonishing three major nominations and it wasn’t even the most successful Irish film.

Over, the next few weeks many columns in many newspapers will be asking what it all means.

Only Nobel Prize wins have, in the cultural sphere, attracted this degree of hysteria. So we may as well start pontificating now.

Domestic observers allowed themselves to believe that this might be a year for the Irish and, far from coming up short, we did better than expected.

The night before the announcement, 25 experts predicted the five nominees for best director. Not one mentioned Abrahamson.

Yet he now occupies the slot the pundits expected to go the way of Steven Spielberg or Ridley Scott. Hope for what ever the heck you want. You might end up with twice as much.

The result also confirms the importance of taking the long view in cultural planning.

If you’re a poet then all you need do is look at a tree or stumble across a dead badger and you’re set up for your next sonnet.

Not all art can be generated with so little preparation. If this is a renaissance then it wasn’t generated in an afternoon.

In the two decades since the reconstitution of the Irish Film Board – co-producers of both Room and Brooklyn – film-makers have steadily learned their trade, funders have tentatively dipped in toes and the public have become used to the idea that good films come from places other than southern California.

You need to plant the vegetation early. You need to monitor the presence of pests. And you must be prepared for a few of your lesser brown funkweasels to die before they reach maturity.

Brooklyn and Room built on the success of earlier projects we’re happy to name: Crowley’s Intermission and Abrahamson’s Adam & Paul among them.

But the triumph also required the inevitable birth of some truly dreadful Irish films whose blushes we will diplomatically spare.

It’s harder to make the case that the triumph of these two films extinguishes the stubborn notion that Irish culture is at its most fecund when at its most literary.

After all, both movies were based on Booker-prize nominated novels: Colm Tóibín’s Brooklyn and Emma Donoghue’s Room.

A determination to find a cinematic language that complements the prose was, however, crucial to the pictures’ appeal.

Look elsewhere and you’ll find younger film-makers such as Donal Foreman (track down his Out of Here) and Tadhg O’Sullivan (seek out The Great Wall) prepared to tear up the narrative handbook.

The success of Irish cinema at this year’s awards season also speaks to a growth in confidence.

The artists who made these films (not all of whom are exactly young) feel no cultural cringe to America or Europe.

Nor is there any sense of the smug superiority that attends the release of, say, a Lars Von Trier film.

This should not surprise us. If we learn anything from a study of the work scoring with awards juries over the last year it is that cinema is an international art form.

Quite correctly, we all got on our high horses last weekend when a British journalist insisted that Saoirse Ronan is a British actress.

But Brooklyn has enough input from the BBC to count as both Irish and British.

Room is also Canadian. Paddy Breathnach’s Viva, which came close to scoring a best foreign language nomination, is shot and set in Cuba.

Ignore my opening paragraph. We’re all in this together. Sadly, in some ways, this year’s Oscars failed to fully grasp the inclusive mentality.

There was not one person of colour among the acting nominees and no female director got close to a directing nod. But that’s a subject for another column.

1 Covid-19: Backlog forces HSE to skip calls to thousands of close contacts
2 One hundred Irish retailers for all your online Christmas shopping
3 Michael McDowell: What exactly is the price of accepting this Nphet advice?
4 Suzanne Lynch’s US Election Diary: Trump ‘walks out’ of TV interview at White House
5 School ordered to reopen after closing due to Covid-19 fears
Real news has value SUBSCRIBE