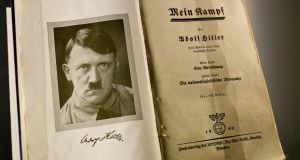 Mein Kampf: “At least with authoritative and objective contextual information, its republication will contribute to that education; it will also serve as a reminder of what a turgid, boring, rambling and terrible read it is.” Photo: Russ Juskalian/The New York Times

To publish or not to publish Adolf Hitler’s Mein Kampf? That is the question that has arisen at various stages since the end of the second World War and has finally been answered. Next month, the Institute of Contemporary History in Munich will publish its version; a 2,000-page tome containing the original text and copious academic notes, the first time publication has been permitted in Germany since copyright was taken from the Nazi movement into the ownership of the Bavarian regional government in 1946.

That copyright, under German law, ends after 70 years. Thomas Krüger, president of the German government’s Centre for Political Education, spoke this week of the significance of this publication in breaking “the Mein Kampf taboo”, but Jewish organisations are divided about the move.

When iconic German writer Günter Grass was awarded the Nobel Prize for Literature in 1999, for “sketching the forgotten face of history”, he acknowledged that Germans would always find it difficult, if not impossible, to break free from their troubled history: “Every time the end of the postwar period is announced in Germany, history overtakes us once again.”

That history will be to the fore once again, in a raw way, with the republication of Mein Kampf, but Grass, who died earlier this year, was one intellectual who was firm in the view it should be published, suggesting in 2003 that Germany was secure enough in its democracy to allow its publication.

Three years later, Grass’s autobiography, Peeling the Onion, was published, in which he revealed he had been a teenage member of the Waffen-SS, and the revelation of his Nazi past was made all the more painful because of the regard in which he was held as the embodiment of Germany’s conscience – indeed for many, its moral compass – since the second World War.

That the 17-year-old Grass had, like thousands of others, been drafted into the SS was not the issue; the problem was that it took him decades to reveal it and during that time he had issued no shortage of reproaches to others for their reticence. As journalist Neal Ascherson put it at the time of his death, “he never missed a chance to upbraid his fellow countrymen for complacency, cowardice or inattention to the past”.

But Grass will still be remembered as someone who played a key role in challenging German amnesia or silences about the past, not just in relation to what Germany inflicted but what it suffered, ignored and eradicated from public memory. In his autobiography, Grass acknowledged that he had wanted to keep his own past secret because of the shame: “But the burden remained and no one else could ease it … assertions of ignorance could not conceal being part of a system that planned, organised and carried out the annihilation of millions of people. Even when accused of active guilt, there remained the worn-down remains of what is all too often called co-responsibility.”

Post-war Germans went to great lengths to atone for the sins of Hitler, and many young Germans in the 1960s and 1970s berated their parents for being tainted with the Nazi era.

Teachers brought young teenagers to visit concentration camps to hammer home the reality of what had happened and awareness of the holocaust was incorporated into the school curriculum, while monuments were erected to Jewish victims and Germany came to have the highest level of immigration in Europe.

It was television that initially contributed most to the atonement; the German telecast of an American Holocaust mini-series in 1979 had an extraordinary impact. While it was regarded as execrable by sophisticated filmmakers, that did not matter a damn in West Germany; it ran for four consecutive nights and was watched by 20 million viewers, more than half the adult population.

Knowledge about what happened and public acknowledgement that it happened became priorities. The publication of Mein Kampf might be seen as the logical conclusion of that decades-long process. It also raises the basic issue of the importance of enlightening people about the worldview from which Nazism arose. At least with authoritative and objective contextual information, its republication will contribute to that education; it will also serve as a reminder of what a turgid, boring, rambling and terrible read it is.

The internet and the availability of the book in so many different places makes something of a mockery of German censorship of the text anyway, but it would be naive to think that its publication is straightforward, given the sensitivities of Jews, the networks of neo-Nazis that currently exist and the ongoing emotive controversies about the issue of immigration.

But it is right to publish it. As Stephen Walt, professor of international relations at Harvard, has simply suggested, it reminds us that “bizarre, incoherent and hateful ideas can sometimes win over enough people to sway a nation and ultimately help lead to the deaths of millions”.

We need to be reminded of that.