‘In the absence of political will to do anything substantial to enfranchise Irish emigrants, talk of the “global Irish family” is just self-serving and lazy blather’ 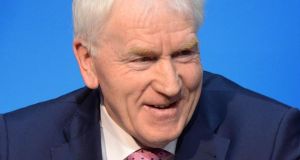 ‘The appointment last year of Jimmy Deenihan as Minister for Diaspora Affairs certainly gave the issue of emigration more political visibility and he has spent much time meeting and greeting emigrants.’ Photograph: Dara Mac Dónaill / The Irish Times

The mobilisation of emigrants to return to Ireland last week to have their say in the marriage equality referendum generated much interest. Those who came back to vote could only do this if they were recent emigrants; under the Electoral Act 1963, Irish citizens living abroad retain their right to vote in elections and referendums for only 18 months after leaving Ireland, and there is no postal vote facility, meaning if they do want to cast a ballot, they must return in person.

Last week’s mobilisation generates obvious questions, not just in relation to the continuing interest of emigrants in what goes on in Ireland after they have left, but in how politicians today view the emigrants and the possible role they have to play in, not just debating what happens in Ireland, but participating in it.

The appointment last year of Jimmy Deenihan as Minister for Diaspora Affairs certainly gave the issue of emigration more political visibility and he has spent much time meeting and greeting emigrants; he also said during the week on RTÉ radio that Taoiseach Enda Kenny is “very connected with our Diaspora, I’ve never seen a Taoiseach as connected”. But what does this mean in practice? Deenihan was on to talk about the prospects of emigrants receiving voting rights in presidential elections and the possible right to elect three senators to a senate Kenny thought so useless he tried to abolish it.

Such moves would be a welcome start but they also smack of a patronising pat on the head for the emigrants and there is still a deliberate vagueness about all this for a very simple reason: there is no real political will to give emigrants substantial voting rights. For all the positive reaction to the young emigrants contributing to a result last week that the Government wanted, offering emigrants the potential to give the serving government a bloody nose is quite a different matter and there is no new appetite to give them political muscle.

Deenihan and his colleagues remain stuck in a time warp on this issue; the idea of electing three senators is largely a proposal from 1996 when the government issued a White Paper on Foreign Policy; the section dealing with the Irish abroad proposed to hold a referendum to grant emigrants the right to vote for three senate seats, the three senators representing the Irish in the UK, the US and Australia. The proposal was to give votes to a potential 900,000 emigrants who had been away for up to 20 years and who had previously lived in Ireland for a minimum of 10 years, with emigrants voting in a single constituency. The hosting of a referendum to allow for the election of the three senators had been promised in the Programme for Government agreed in 1994 but it became clear in 1996 that agreement would not be reached on it and the proposal was dropped.

Deciding how emigrants might be enfranchised is not straightforward, but there is no reason why, if the political will existed, a means could not be devised to do something substantial in this area. Votes for Irish Citizens Abroad (Vica), established by the Irish community in London, has remarked, “It appears that Ireland wants emigrants to go on contributing through a variety of ways, including economic, social and cultural remittances, but does not want them to have any say in the future political direction of the country to which most of them want to return.”

Vica advocates not just a vote in presidential elections and referendums but the right to vote in elections for the Dáil for all Irish citizens abroad who are first generation emigrants (that is, who were born in Ireland and left), “which would be managed by a system of reserved constituencies in order not to swamp the votes of resident citizens”.

In stripping its emigrants of the vote, Ireland is at odds with at least 115 countries around the world, and of the 28 EU members states, only Greece, Malta, Ireland and the Czech Republic do not extend the franchise for national parliaments to its citizens living abroad, and the Maltese government, to its credit, at least subsidises flights for citizens who want to return home to vote. In the other EU states, emigrant voting rights in different types of elections are ensured using a variety of means; in five of those states, separate representation for non-resident citizens in the national parliament is offered.

For Irish emigrants the very least that could be done is to extend their right to vote for a much lengthier period after they leave, such as operates in the UK; British citizens living overseas are entitled to vote in UK general elections and European elections for up to 15 years after moving abroad. In the absence of political will to do anything substantial to enfranchise Irish emigrants, talk of the “global Irish family” is just self-serving and lazy blather.

Read the new Returning to Ireland guide for returning emigrants published today by The Irish Times, with information on jobs, housing, health and education, and advice from Irish emigrants who’ve already moved home.