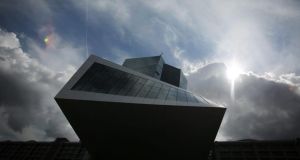 ‘The crisis may be over, but there are huge problems to be faced in the banking and financial sector and a big job to be done in managing relationships with Frankfurt.’ Above, the European Central Bank in Frankfurt. Photograph: EPA/FREDRIK VON ERICHSEN

A boffin or a bureaucrat? A banker or a bean counter? The debate is on about what kind of person is needed as the new governor of the Central Bank, to succeed Patrick Honohan. Forgive me for suggesting another quality required – the new Central Bank governor will need sharp elbows and a willingness to use them. The governor will need to be prepared to kick around the banks, say no to the government and to fight Ireland’s corner in the intensely political climate of the European Central Bank. It is not a job for an administrator or a consensus builder – it is a job for someone with a big and independent brain who can win respect and isn’t afraid to fight their corner.

Applications for the job closed during the week and interviews will start shortly. We are told that the executive search spanned all the major continents with the exception of South America. No doubt it has, and no doubt the interview panel will appreciate the importance of the position to be filled. Yet ultimately this is a political appointment, decided by the Cabinet.

Any hint of a return to the “muggins’s turn” of yesteryear, when one of the Department of Finance bosses was anointed as governor seemingly by right, has to be avoided at all costs. This does not mean a senior civil servant should be ruled out. That would be ridiculous. One of the bookies’ favourites has been Robert Watt, secretary general of the Department of Public Spending, surely a strong contender, if interested. Other senior public servants may also be in the frame.

If one of them wins the race, it must be on the basis of clear and demonstrable qualities, not because the Government feels they will “do the right thing” by the political system. This job is simply too important for it to be the outcome of a political negotiation between Fine Gael and Labour. The crisis may be over, but there are huge problems to be faced in the banking and financial sector and a big job to be done in managing relationships with Frankfurt. This job matters and its independence from government should be accepted across the political spectrum.

Given the need to be able to bat convincingly in Frankfurt, a strong economic background will surely be a requirement. How else do you participate in the high- level discussions on interest rates, monetary policy and banking supervision?

Frankfurt is where interest rates are set and, now, where our banks are supervised from. If, for example, the Government wants to start selling down its AIB stake, the banking supervisor in Frankfurt will have to sign off on what this means for the bank. If a bank gets in trouble, Frankfurt will be the place it is sorted out. And it is Frankfurt which will try to dictate the unwinding of the Central Bank bond holdings taken on after Irish Bank Resolution Corporation’s liquidation, a matter of significant financial interest to the State.

This is likely to put a few candidates with experience of working in Frankfurt in the frame, alongside some of the home contenders – civil servants, academics and possibly a few former central bankers – and perhaps some international names. It will be a fascinating contest.

The new governor will also face battles on the home front. The banking system is still a long way from normality. Total credit outstanding to households and businesses continues to fall year on year, though it is showing some signs of stabilising. Demand for loans – or the lack of it – is one reason, but the banking system is still not functioning as it should. Overseeing its return to normality is a big job.

This, too, will require a lot of battles. This Government, and no doubts its successor, will demand lower interest rates for borrowers, while at the same time arguing for a softly-softly approach on dealing with mortgage arrears. And without any recognition of the contradiction in these two positions. The banks will try to get profits up as quickly as possible, using “the need to rebuild capital” as an excuse for profiteering. And from credit unions to the insurance sector and the International Financial Services Centre there is the potential for unexploded bombs which need to be defused, or some crisis to be dealt with. The ability to say “no” will be very important.

Picking a governor will not be easy. No one will tick every box. But moving into its final months, this is a key appointment for the Government. Former minister for finance Brian Lenihan broke the mould when he chose Honohan. The new incumbent will, let’s hope, not face the same kind of existential financial crisis as did Honohan, who was a key figure in rescuing and restructuring the sector, as well as finally persuading the European Central Bank to allow the promissory notes to be torn up. He was also conscious of his independence, as famously shown in the phone call to Morning Ireland to call the then government’s bailout bluff.

The outgoing governor, when retiring, said he was more of an “ideas man” than an implementer, indicating that the latter skill was important for the next phase of Central Bank leadership. He may be right. But ideas and vision are important, too and the clout to go with them. And, of course, those sharp elbows. Twitter: @CliffTaylorIT