Chris Johns: Ajai Chopra needs to take his share of the blame for bungled bailout

If IMF was so vehemently opposed to what was going on it should have said so at the time, perhaps even threatening to withdraw from bailout 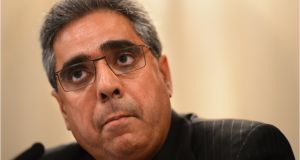 “In any event, if you argue for something, no matter how flawed you might privately believe it to be, you are saddled with the blame when things go wrong. It’s called cabinet responsibility.” Photographer: Dara Mac Donaill/The Irish Times

Ajai Chopra, head of the IMF’s mission to Ireland during the banking crisis, has once again pointed the finger at the ECB for our bungled bailout (Irish Times, December 3rd).

He protests too much. The IMF itself was also a flawed actor in all of this: his case would be made much stronger if he also admitted to IMF culpability in addition to blaming the ECB.

As the banking inquiry has discovered, it’s complicated. Our domestic debate during the crisis often ended up with a simplistic shouting match about whether or not to “burn the bond holders”. At least Chopra, and by implication the IMF itself, acknowledges that paying back all the bank bonds was a disastrously flawed policy, a mistake the ECB will never own up to.

But many other decisions turned out to be hopelessly wrong. And to blame the ECB exclusively for insisting on full repayment for Anglo Irish Bank and Nationwide creditors fails to admit the role played by the US Treasury secretary Tim Geithner, who is widely reported to have vetoed any suggestion that the Irish government would default on bank bonds.

If the IMF was so vehemently opposed to all of this it should have said so at the time, perhaps even threatening to withdraw from the bailout. Chopra will probably argue that this would have been a nuclear option, one with even worse consequences than the flawed path taken. We will never know.

He claims the reason he said nothing at the time was the need for the Troika to present a united front, a “consensus”.

This, apparently, was more important than getting it right. Why? In any event, if you argue for something, no matter how flawed you might privately believe it to be, you are saddled with the blame when things go wrong. It’s called cabinet responsibility.

It’s more serious than merely apportioning blame. Questions can be asked about whether or not the IMF violated its own statutes with the terms of our bailout (and Greece’s).

At its simplest, the IMF exists to help countries with balance of payments difficulties. What is supposed to happen is that temporary funding is provided to help a country that cannot access private markets to pay for its external deficit.

The IMF is not there to lend money so that external creditors, having made dubious lending decisions, simply get their cash back. But, in part at least, that’s exactly what happened. And that’s against the rules.

Everybody in this sorry saga bears responsibility, but it is inevitable, and human, to try to find a single scapegoat. It is equally natural to try to simplify an incredibly complex story. Others have tried and ended up with book-length narratives. And multiple commissions of inquiry.

The role of failed regulation has been rehearsed many times: we fruitlessly focus on domestic “regulatory capture” (who played golf with whom) and fail to spot the equally culpable role played by both the EU and the IMF.

Between 2004 and 2011, the Committee of European Banking Supervisors (CEBS, now the European Banking Authority) repeatedly failed to say anything useful about the growing problems with Irish bank balance sheets.

As Prof Barry Eichengreen, one of the best analysts of banking crises, has pointed out, the 2007 CEBS annual report mentioned Ireland only once, and then merely to state that the Irish Central Bank is the lead regulator.

Also in 2007, the year that really should have seen regulatory alarm bells going off everywhere, the IMF in its regular “Article IV consultation” with Ireland concluded, “Directors [of the IMF] welcomed the indicators confirming the soundness of the Irish banking system, including the stress tests suggesting that cushions are adequate to cover a range of shocks even in the face of large exposures to the property market”.

The best brains in the world charged with looking at banks couldn’t see anything wrong: the search for mendacious actors at dinners after golf is utterly pointless.

In fact, it is worse than that: the natural search for simplistic narratives and someone else to blame wastes the energy and effort needed to learn proper lessons. Nothing of any real substance gets done to help either prevent or mitigate the next crisis.

If we are incapable of learning, we should at least reflect on poor decisions taken in light of things we knew to be true, even back then.

As Eichengreen and other experts have said many times, the blanket bank guarantee ignored an extensive body of knowledge and experience about bank resolution, ignored the difference between insolvency and illiquidity, ignored the known importance of shutting down insolvent institutions quickly and ignored the critical need to bail in (not out) uninsured creditors - those bond holders again.

This is not about learning, this is not hindsight: we knew all of this at the time. At least, even if some in authority in Ireland did not possess this expertise, the IMF certainly did. This is the culpability that Ajai Chopra fails to acknowledge. He should have stood up to the ECB.

But Chopra is right to argue that the ECB has behaved badly throughout all of this. And that raises all sorts of questions.

The ECB is in need of reform: it failed badly during the banking crisis and is currently failing to meet its single most important objective - namely to maintain inflation close to 2 per cent.

It would be churlish to argue that nothing has been done by the various authorities to correct any of the mistakes. But these efforts haven’t amounted to much.

n particular, the European banking system is not ready for the next recession. The big bet, as always, is that the next economic downturn is so far away that we don’t have to do much about it now.