Calling time on cheap drink would be big step forward

The big ticket solution on offer is minimum unit pricing 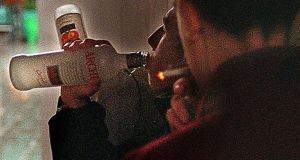 This is a problem with a thousand tentacles.

About four people a week were killed on the roads last year. Meanwhile, alcohol-related disease kills three people a day. Consider the difference in public awareness. A quarter of injuries admissions to emergency departments are alcohol-fuelled. It captures a precious 1,500 hospital beds every night. Behind those shocking statistics are every day stories of multi-generational catastrophe. We can debate the statistics about alcohol-consumption figures till doomsday but these are the facts. Education campaigns have failed. The “Drink Responsibly” slogan is risibly bland and useless. My preferred option – city centre hospital treatment units built, managed and financed entirely by the drinks industry – has not materialised. The drink culture lives on.

What makes ours exceptional is that so much of it happens out in the open, reeling around our streets, shaking its stupid, menacing fists in our faces, leaving its disgusting excretions on our footpath to be washed away by heroic council staff.

As a Martian visitor out on a Friday night, you might be astonished to discover there are existing laws about drunken behaviour. Pubs are forbidden by law to serve drunken people, for example. Many areas have bylaws forbidding the consumption of alcohol in public and related deeds that contravene public order. And those suspiciously young-looking people lurching around ? Ah yes, they will have tanked up before they left someone’s house. They got the money together because there is very cheap drink available and may well have commissioned a moronic adult to buy it for them.

In an Aldi store, I witnessed a shabby, 40-something man holding a couple of slabs of beer approaching the check-out. Before he even got there, he was told to leave by a staff member. Without a word, he put down the beer and left. I asked the staff member why he was treated like that. It turned out he was a serial supplier to the youth of the area.

This is a problem with a thousand tentacles. For the vast majority of alcohol retailers, it is more than their businesses are worth to sell drink to the under-aged. The Aldi example suggests some take their responsibilities very seriously indeed.

Measures in the Public Health (Alcohol) Bill 2015 designed to force responsible behaviour on the industry are what you might expect. Labelling will be graphic, alcohol content will be very clear and related to daily recommendations and there will be a public awareness campaign explaining it all, of course. Advertising and marketing will be reined in (though not sport sponsorship, notably), and some degree of structural separation between alcohol and groceries in stores is proposed. But the big ticket solution on offer is minimum unit pricing (MUP). Multiply the minimum unit price (between 60 cent and €1.10) by the number of grams of alcohol and that equals the minimum price of the product. It is a more targeted approach, they say, in that it is designed to affect only the price of cheaper alcohol. The cheapest small can will probably cost €1 and a bottle of wine a minimum of €8.

Will it work ? Yes, if you believe alcohol is price-sensitive. Presentations at the Joint Committee of Health and Children were wholly positive, though Canadian researchers pointed out the obvious – that the high-risk, hard-drinking target group will just “seek out the most inexpensive alcohol in order to maximise ethanol intake per dollar spent”. Interestingly, the retail drinks trade supports MUP almost unanimously. No doubt, they’re being purely altruistic, but they stand to gain about €69 million extra as a result. This projected bounty has prompted calls for a ringfenced “social responsibility” levy based on the proposed Scottish model, which might go some way towards financing addiction treatment centres.

So is it worth the effort? One life saved, one household with stability restored, one elderly person given a hospital bed instead of a trolley, are surely worth the effort.

The Scots certainly think so. They’ve been trying to introduce MUP since 2012, but have been stymied by fiercely-determined, drink industry appeals to Europe. That should tell us something important.