Brian Boyd: The petulant adult-children of Generation Snowflake have a point

For all their daft Pollyanna nonsense, at least they realise that people really do matter 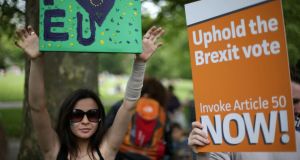 The Picnic to Discuss Brexit: Generation Snowflake went to London’s Green Park to express their anger at Brexit. They forgot only 36 per cent of them bothered to vote. Photograph: Daniel Leal-Olivas/AFP/Getty

A father shows me the text reply he got from his 19-year-old daughter after reminding her to vote in the recent EU referendum. It read: “Sure, send me the link.” We spent the rest of the evening passing judgment on Generation Snowflake.

While they are better-known as “millennials”, the term Generation Snowflake refers to the fact our current young generation are censorious cry babies. You would have seen them recently gathered at a “Picnic to Discuss Brexit” in London’s Green Park. They were there to express their “anger” at Brexit, perhaps forgetting only 36 per cent of the Snowflake generation bothered to vote. They did suggest democracy could be enhanced by allowing people to cast their vote on Snapchat.

If every generation has a mordant contempt for the one that precedes or succeeds it, the Snowflakes are getting a bit of a patriarchal, heteronormative kicking right now. Baby Boomers (born between the end of the second World War and the start of the 1960s) smoked jazz cigarettes and had “sit-ins” for peace. The generation before them said sitting down for peace wasn’t the same as travelling to a foreign field to fight fascism.

The National Union of Students in the UK recently called for the abolition of representatives of gay men on LGBT committees; being men they don’t face quite enough oppression by society.

Young feminists at a conference were told to use “jazz hands” instead of applauding a speaker, as the sound of applause could trigger anxiety in some delegates.

All of these reports are not fabrications, exaggerations or urban myths. They have all actually happened within the last 12 months. This is Generation Snowflake, this is who they are and what they believe. These are the people who have never forgiven God for not making them something more “diverse” than plain old white and middle class. These are the people who spend a lot money to dress so they look like a Victorian child going off to work down a coal mine but are in fact called Oisín and live in a big house in Sandymount. Petulant, privileged, patronising adult-children.

Then again, haven’t we heard these stories before? Back in the 1980s, we laughed along as we read about the activities of “loony left” Labour councils in the UK. How they wanted to promote “blacks, gypsies and homosexuals” to jobs they weren’t entitled to and how they wanted to rename manhole covers as “people hole covers” and ban the singing of the nursery rhyme Baa Black Sheep because it was racially insensitive.

The great Martina Navratilova was roundly applauded for making the point in a documentary of her life that “the only people who don’t have to fight for anything in this life are straight, white men; everyone else has their own mountain to climb”. And aren’t Generation Snowflake just clumsily and over-earnestly trying to make the very same point?

I look to my generation (Generation X – born in the 1960s and 1970s) and I see a cohort that lived through times of tumultuous political change (the Soviet Bloc crumbling, apartheid dismantled) and a technological revolution that changed all our lives irrevocably. And I saw with my own eyes how we harnessed the power of that technology. We used it to give out about the Ray D’Arcy show on Twitter.

As Bush and Blair waged an illegal war that killed hundreds of thousands and a despot took power in Russia, I watched how we posted photos of food and captioned it : “Nom nom nom”.

How we allowed criminals to infect our political system and how law-abiding, tax-paying citizens of this Republic were left to die in conditions the EU has even outlawed for animals.

And in all that this life has granted us in terms of education and opportunity, we became small of thought and mean of mind. And now we arrogate to ourselves the mockery of the generation coming up behind us. For all their daft Pollyanna nonsense, at least Generation Snowflake realise that people really do matter. We may be begging for some of their bleeding heart compassion sooner than we think.

1 Dr Martin Feeley: Young and healthy majority need to be allowed to live
2 Aer Lingus staff say they are living in ‘near poverty’ and unable to cover rent
3 Covid-19: Warning of similar measures for other counties as Donegal moves to Level 3
4 Republican leaders reject Trump’s stance on peaceful transition of power
5 Next 10 days critical in fight against Covid-19 in Cork, says adviser
Real news has value SUBSCRIBE