What gets lost amid ceaseless chatter about Serial and its peers is fact that families will be visiting graveyards this Christmas while we are listening, watching and talking about death of their son or daughter 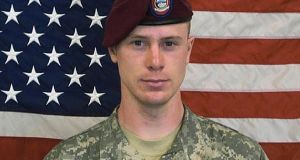 US Army Sergeant Bowe Bergdahl. What ‘Serial’ have is extensive and recent long-form, open-ended interviews with Bergdahl which go into the very specific reasons why he deserted his post. Photograph: US Army/Reuters

It takes a lot to knock Conor McGregor out but a US army soldier has been doing just that . . . at least in terms of “Who is?” Google searches this month.

Bowe Bergdahl has just learned he will face a court martial on charges of desertion and misbehaviour before the enemy. But that is not why the 29-year-old is in the news. Millions of people worldwide now know him as the subject of the second season of the Serial podcast.

For those who tuned in late, last year’s first season of Serial was hailed as a cultural phenomenon, was listened to by a record-breaking number of people, won a prestigious Peabody award (the first podcast to do so) and was credited with creating a new genre of storytelling.

With listening figures increasing for the second season, Bergdahl’s court martial will now be the subject of international media scrutiny, with all that that implies for how the procedure is executed.

The first season of Serial looked at the “cold case” 1999 murder of Hae Min Lee, a student in Baltimore. It examined the murder conviction of her ex-boyfriend, Adnan Syed (who has always protested his innocence) and cast doubt on Syed’s conviction.

It, of course, cannot be implied that the global interest in the podcast had any role in the reopening of the case. Syed will get a hearing for post-conviction proceedings next February when his lawyers are expected to introduce a potential alibi witness for Syed.

What can be stated is that the world’s media will be observing and reporting on Syed’s February hearing. How this will alter matters remains the subject of social research. But it does alter it.

Equally, the second season of Serial (the podcasts are currently going out each week at serialpodcast.org) should have no impact how on the US army goes about its court martial of Bergdahl.

However, it would be wrong to believe that having millions of people interested in the outcome of the court martial won’t make any difference as to how it is conducted. Many of those people got to know about Bergdahl’s plight only through Serial.

We still don’t know how Serial will treat Bergdahl’s decision to leave his post while on duty with the US army in Afghanistan in June 2009. He was captured by the Taliban days after his desertion and held for five years before being released in 2014 in a prisoner exchange deal.

The “murdertainment” angle – a key feature of the Serial podcasts – is provided here by the allegations from Bergdahl’s fellow soldiers that six US troops died because of his actions – it is claimed the soldiers died while searching for Bergdahl. It has also been alleged by his fellow soldiers that after being taken captive, Taliban attacks on US army bases in Afghanistan (with loss of lives) became more directed, the implication being that Bergdahl provided intelligence to the Taliban.

For what it’s worth, US presidential candidate Donald Trump has said Bergdahl should have been executed for deserting his army post.

What Serial has is extensive and recent long-form, open-ended interviews with Bergdahl, who currently has an army desk job in the US while he awaits his court martial. These interviews go into the specific reasons why he deserted his post and what happened to him during his five years being held by the Taliban. How this will sway public opinion for or against Bergdahl remains to be seen.

We know that the first season of Serial spilled over into social media to an alarming extent. Bearing in mind that the subject matter was the real-life case of Hae Min Lee, who was strangled to death, some fans of the podcast turned amateur sleuth and had to be warned about posting the home addresses of potential suspects in the case along with libellous accusations.

Hae Min Lee’s family had to endure cruel and exploitative chatter about their daughter’s character and sex life, and there was something gruesome in the fact that “Team Adnan” badges went on sale alongside hats and T-shirts.

This wasn’t a TV whodunnit; this was about a young woman being murdered and a young man serving life for her murder. But then the very fact that people thought they could “solve” the case was a large part of its attraction.

As we learn more and more about Bergdahl over the next few weeks, social media will be awash with opinions, attitudes, anecdotes, first-hand testimonies and the usual depressing round of name-calling and finger-pointing between those with different views on Bergdahl’s actions.

It confuses rather than clarifies matters that earlier this month a detective sergeant called Tam Bui from Toronto’s homicide squad – and a fan of the Serial podcast – began sharing clues to a local cold-case murder on Twitter using the hashtag #Serial. Each Saturday during the recent investigation of a 2012 unsolved Toronto murder, Bui would tweet a new clue.

The Toronto police won’t confirm that it was the public reaction to Bui’s tweets that led to a man being arrested and charged with the murder this month, but Bui did say that, in a world of camera phones and with everyone hooked up to social media, online activity has assumed an increasingly important role for detectives.

Already receiving “better than Serial” reviews from the critics, the “high-end, true-crime” drama focuses on a man currently serving a life sentence for a gruesome murder who – guess what – is proclaiming his innocence.

To be fair Making a Murderer comes with an absorbing back-story and is brilliantly done. The show is also quickly becoming a social media talking point.

What gets lost, though, amid the ceaseless chatter is the fact that families will be visiting graveyards this Christmas while we are listening, watching and talking about the death of their son or daughter. But hey, that’s murdertainment.

1 Normal People Class of 2020: The nine college friends in the series
2 We need to pay very close attention to what is happening in Britain now
3 Connell losing touch with club championship is real tragedy of Normal People
4 George Floyd: police forcefully crack down on widespread protests
5 Seven great Irish escapes to rent when lockdown lifts
Real news has value SUBSCRIBE