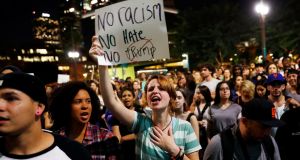 As iniquitous as it may seem, the vote of a college graduate/artist/creative/urban professional carries the exact same weight as that of someone living in a trailer park. Dems the rules. Photograph: Patrick T. Fallon/Reuters

In the event of Electoral Disappointment, please proceed immediately to the nearest high moral ground, wrap yourself in a cloak of racism/sexism/homophobia/xenophobia invincibility, then pout and stamp your feet before displaying your stigmata wounds for the world to see.

You may then safely condescend to lecture women, black people and the working class as to why they were operating on a lower level of political consciousness when they cast their vote the wrong way. You can unilaterally ascribe to them the confused emotions they were feeling while voting, and using the benefit of your private school education and/or university degree you may re-educate them as you patiently ask: “Now what did we do wrong this time?”

There is no sight more ridiculous than the liberal left/social justice warrior coalition in one of their periodic fits of morality. For a constituency so offended by “shaming” in any other form, there is now the despicable sight of “voter shaming”.

Women who voted the wrong way are being accused of “false consciousness”. Why did those fractious black voters not do as they were told? And those who had the cheek to vote for a third party candidate … well, I hope you’re happy now, you’re responsible for the end of the world as we know it.

As for those frightful white working class people – what else do you expect from uneducated, low income, sexist, racist, misogynist, homophobic xenophobes?

How can it be that people who rejoice and revel when a vote goes their way, turn into mewling, petulant, finger-pointers and name-callers when democracy is so insensitive to their needs that it actually enacts the will of the people and elects Donald Trump as US president?

Everything the Trump campaign was rightly accused of – being boorish, bullying “everyone else is to blame-ism” now has its mirror image on the left. And from within this carapace of purity and righteousness, your entitlement allows you to pass moral judgement on how and why other people voted.

It matters nothing who (whether it be Donald Trump or Mattress Mick) is elected to the oval office. It matters everything that the democratic imperative which facilitates people marching in the streets of the US to register their abhorrence with the result, concurrently means a gracious acceptance of that result.

The people who punched the ballot for Obama in 2008 and 2012 (a good vote) but this time punched for Trump (a bad vote), are now being asked to explain themselves. Will the interrogation begin with “Are you now or have you ever been …?”

As with the Brexit vote in June, you have the sickening spectacle of private school educated social justice warriors hectoring working class voters as to the error of their ways. The voice of privilege with its sense of noblesse oblige.

This week, the infantilization of political discourse became complete. Why did people vote in a way that doesn’t meet with my approval? I didn’t get what I want, so I will now attribute blame.

But, as iniquitous as it may seem, the vote of a college graduate/artist/creative/urban professional, carries the exact same weight as that of someone living in a trailer park. Dems the rules.

Endlessly repeating the incantation: “racist/misogynist/homophobic/xenophobic” may burnish your social media halo and the Snowflake belief that “Everyone who doesn’t agree with me is Hitler”, may help in the short-term with your post-Trump stress disorder, but a calm acceptance that you live in a world with people who have different priorities and beliefs to you (and who may well be irritated by your constant passing of judgement on them) may be more salubrious in the long-term.

While we can safely assume that a Donald Trump presidency is unlikely to bear comparisons with that of Abraham Lincoln, we may be in danger of over-attributing the importance and effect of Trump as president.

Barack Obama’s election in 2008 was hailed as a closing of the book on centuries-long, troubled race relations within the US. But after eight years of a black president, there appears to be nothing better than a shoot-to-kill policy on black people under certain circumstances.

As with Reagan and Bush, Trump too will pass. Meanwhile, I’d get a doctor to have a look at those stigmata wounds.

1 Covid-19: NPHET member denies trying to ‘scare people’ with warnings
2 The more London’s lockdown eases, the clearer the crisis becomes
3 ‘My rent here is so low it’s a joke’
4 Monster or machine? Everything we know about coronavirus after six months
5 ‘Sad day’ for House of Ireland as tourism retailer goes out of business
Real news has value SUBSCRIBE