Breda O’Brien: The norms may have changed but the pressure to conform remains

“Vindictive protectiveness” is on the rise 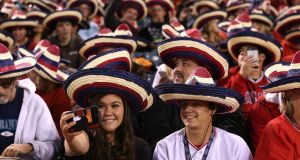 Sombreros: Banned at the University of East Anglia lest they cause offence. Getty

Two weeks ago the student union of the University of East Anglia banned a Tex-Mex restaurant called Pedro’s from distributing sombreros during freshers’ week, because it wanted all its students to feel accepted.

Apparently, distributing sombreros comes under the heading of cultural appropriation, or racism, or both.

Cultural appropriation describes a power dynamic in which members of a dominant culture take elements from the culture of people oppressed by that dominant group. The good people of Norwich have been oppressing Mexicans? The public should have been informed.

This, and similar incidents, are happening in universities, where people are supposed to develop the ability to think!

The current cover story of The Atlantic, is a piece by Greg Lukianoff and Jonathan Haidt, called “The Coddling of the American Mind”. Lukianoff is a constitutional lawyer and Haidt is a social psychologist who is a secular liberal.

They look at the rise of what they call “vindictive protectiveness”, that is, a culture in which “everyone must think twice before speaking up, lest they face charges of insensitivity, aggression or worse”. They give some startling examples, such as law students at Harvard requesting that their professors not teach about rape law, or even use the word “violate” (as in “that violates the law”) lest it cause students distress.

Microaggression is another buzzword, meaning the thousands of small insults and hurts to which minorities in society are often subjected. In other words, it describes something real, but because denying that something is a microaggression is in itself evidence of insensitivity, it is often used simply to silence others.

The only possible response to being “called out” for a microaggression or other offence is sackcloth and ashes. Defending yourself against the charge adds to the hurt. Lukianoff and Haidt contend that this new version of political correctness “presumes an extraordinary fragility of the collegiate psyche, and therefore elevates the goal of protecting students from psychological harm”.

But they believe that in the effort to protect from emotional harm, students are being infantilised, and will be ill-prepared for the cut and thrust of the real world. Equally importantly, there is a punitive aspect to this new movement, that is, not just the desire to name and shame people who violate (sorry) these new codes, but also to prevent them speaking in the first place.

University student unions have taken to banning people who are judged to be outside the pale of acceptable thought and speech, as their presence will make the university “unsafe”.Whatever happened to convincing others of the error of their ways by producing better arguments?

Lukianoff and Haidt speculate some of this stems from so-called helicopter parenting, because overly sheltered young people can’t cope with challenges.

The internet is another cause: it is so easy to whip up intense hatred online that many US college professors fear for their jobs if they step on students’ toes in any way.Haidt is also involved in another project called the Heterodox Academy. He and a number of colleagues from different disciplines (his area of expertise is the psychology of morality) became concerned about the monolithic political culture developing in social psychology.

Before the 1990s, social psychology leaned left – Liberals and Democrats outnumbered Conservatives and Republican by four to one or less. Now the figure is 12 to one. Haidt believes this is bad for the field, with grave danger of confirmation bias, that is, searching for evidence that will confirm existing beliefs while also ignoring or downplaying evidence that challenges cherished narratives.

And the most cherished narrative is that liberal causes are good, and conservatives are not just misguided, but enemies of all that is progressive and enlightened.

Groupthink begins to rule. The scary thing is that even though academia is stultifying in its lack of diverse viewpoints, it is still not enough for students, who want even more censorship.

What is Trinity Student Union’s idea of “nuanced discussion”? A panel of six pro-choice speakers, with no pro-life voice. The only concession to diversity was giving out the email address of a student willing to facilitate discussions among students who did not agree with the student union’s pro-choice stance.

We have always had a conformist streak as a culture. We have only succeeded in changing the content of what we are supposed to conform to, not the impulse to force people to fall in line with the dominant ethos.

1 Late Late Toy Show duet with musical hero ‘absolutely mad’ says delighted teen
2 Ireland’s teenage pariahs: ‘We are really at breaking point now’
3 Waterford turn Kilkenny upside down and inside out
4 Married to Gene Kelly: 'He didn't seem that old to me'
5 Jim McGuinness: There is a way to save championship and make it competitive
Real news has value SUBSCRIBE