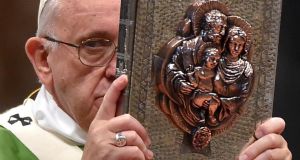 Pope Francis celebrates the closing Mass of the Synod on the Family. He announced a new Vatican office for Catholic laity and families. Slow, slow progress, but progress, nonetheless. Photograph: Ettore Ferrari/EPA.

Here are some things that did not get much attention from those who covered the recent Synod on the Family. As usual, all the focus was on the political question as to whether the progressives or conservatives are in the ascendant.

Personally, I blame an Irishman for that, or at least an Irish-American. Fr Francis Xavier Murphy, born in the Bronx, with an Irish policeman father and an Irish hotel-worker mother, was a rambunctious Redemptorist. He wrote for the New York Times under the pseudonym Xavier Rynne about the Second Vatican Council, and thus began a long tradition of writing about the Roman Catholic Church as if it were an epic struggle between conservatives and liberals.

The model does not fit. For example, who wrote this during the synod?

“In this sense the Encyclical Humanae Vitae (10-12) and the Apostolic Letter Familiaris consortio (14, 28-35) should be re-developed and the willingness to have children be awakened, contrary to a mentality that is often hostile to life and partly to children.

“Young spouses should be encouraged time and again to give life to children. This will make the openness to life in family, Church and society grow.”

In the same document, the German-speaking group reiterated traditional teaching on gender, saying, “All theories that regard human sexes as a subsequent construct and encourage an arbitrary social interchangeability, are to be rejected as ideologies.”

They also suggested a “marriage catechumenate” of several months before people are married in church. Technically, a catechumen is an adult undergoing rigorous preparation for reception into the Catholic church. The German speakers, allegedly the most liberal members, called for a similarly rigorous process for marriage preparation.

This concern for adequate marriage preparation is reflected to some extent in the final synodal document, in paragraphs 56 and 57, which calls for a much broader and deeper process of marriage preparation, including accessing the wisdom of those who have been married for some time.

Given the current refugee and migrant crisis happening in Europe, and the conditions that have given rise to huge migratory flows in the Middle East and Africa, it is unsurprising that the synod also focuses on this issue. In particular, it looks at the impact on families.

The final synodal document points out that human mobility has always been part of the world’s culture, and that it can bring great enrichment to the country that receives migrants and refugees. The document calls not only for pastoral care of those who leave, but also of those left behind, and for a spirit of openness, generosity and hospitality.

It also mentions the plight of Christians forced to flee, and quotes Pope Benedict: “A Middle East without Christians, or with only a few Christians, would no longer be the Middle East, since Christians, together with other believers, are part of the distinctive identity of the region.”

In August 2014, Islamic State launched an unprecedented and utterly savage attack on the Plains of Nineveh, which left thousands of Christians and Yazidis dead.

During this assault, as Allen reminds us, “Churches, and monasteries were destroyed, centuries-old Christian manuscripts were burned, and scores of Christians were killed, often in staggeringly brutal fashion – flogged to death, beheaded and, in at least a few cases, reportedly crucified.” In other words, in Iraq and Syria, Christians face extermination. It puts the issue of communion for the divorced and remarried into perspective.

The other story that got virtually no attention is that, for the first time, a nonordained man had both a voice and a vote at the synod. True, Brother Hervé Janson is the leader of a tiny religious order, the Little Brothers of Jesus, but it is a start, as he is still a layman because he is not a deacon, priest or bishop.

A layman voting at the synod sets a precedent and shows it is at least possible that a laywoman, or laywomen could do so in the future, because from the point of view of the church, laywomen and laymen have the same status.

The pope announced a new Vatican office for Catholic laity and families at the synod. It is not too much to hope that women could be appointed to senior roles there. Slow, slow progress, but progress, nonetheless.

These stories are not as stereotyped as bad conservatives fighting brave progressives, but they are important, nonetheless.