Breda O’Brien: Little sympathy for migrants who make it to Ireland’s shores

‘In a landmark decision on Wednesday, the High Court ruled that gardaí­ failed to identify a victim of human trafficking, resulting in a trafficked woman being imprisoned in Mountjoy for two and a half years’ 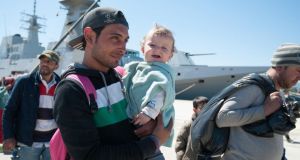 ‘There is genuine horror at the stories emerging of migrants drowning in their hundreds, and the danger, as Pope Francis put it, of the Mediterranean becoming a vast cemetery.’ Above, rescued migrants after disembarking from the Italian Navy vessel “Bettica” in the harbour of Augusta, this week. Photograph: AP Photo/Carmelo Imbesi

‘Below decks, hundreds of men, women and children huddled together in the dark on bare wooden floors with no ventilation, breathing a stench of vomit and the effects of diarrhoea amid no sanitary facilities.”

These overcrowded vessels left Ireland for Canada and the United States around the time of the Famine. The passengers’ fares were often paid by landlords who cynically calculated it was cheaper than paying for their keep in a workhouse. There was little welcome for those who survived to make it to Grosse Isle or the US.

With our own history, you would think that we would have great empathy for the dispossessed and the desperate, willing to risk everything to escape dire conditions.

And we do empathise. There is genuine horror at the stories emerging of migrants drowning in their hundreds, and the danger, as Pope Francis put it, of the Mediterranean becoming a vast cemetery.

In a landmark decision on Wednesday, the High Court ruled that gardaí­ failed to identify a victim of human trafficking, resulting in a trafficked woman being imprisoned in Mountjoy for 2½ years.

Ms P is a 54-year-old Vietnamese woman, arrested in a Garda raid on a cannabis grow house. She languished in prison because the Garda failed to recognise she was a victim of trafficking.

Migrants in the Mediterranean area are not all being trafficked. Traffickers transport people with the explicit intention of bringing them to a place where they will continue to be exploited, as workers or sometimes in prostitution.

Smugglers, although often equally cynical and exploitative in the way they take advantage of desperation, simply transport migrants and leave them to the mercy of whoever receives them.

We can be critical of Italian reception centres but our refugee and asylum-seeking system is scarcely a céad mile fáilte. We have been promised reforms, including a review of the pitiful allowance of €19.10 a week. The proposal to allow children of asylum-seekers who have been in Irish schools for five years to attend university at the same level of fees as Irish students is also very positive. However, it is still too little, and especially because the issue of forced migration is only going to get worse, as people flee from war, economic disaster and climate change.

Enda Kenny and other European Union leaders have failed to create a response radical enough to tackle the problem. Although traffickers and smugglers exploit rescue operations and cynically factor them in to their plans, those operations must be restored. The 10-point plan put forward by the EU has some humane aspects but much of it simply strengthens border controls.

Although there is significant anti-immigrant feeling in Europe, “Fortress Europe”, which attempts to repel virtually all newcomers, is not the answer.

It is essential to commit to creating new legal channels of immigration so people do not feel forced to risk their lives. And some EU countries – including the Republic – need to accept greater numbers.

In recent times, a series of a conversations about climate change has been hosted in partnership with Christian Aid, the Environmental Pillar, Ibec, the Irish Congress of Trade Unions and Trócaire.

At the first event, artist Emily Robyn Archer showed family photos of when she and her family lived in Kenya – including photos of the house where she used to live – now enveloped in flood waters.

Her art is raising awareness of the realities of climate change and the need to respond. She also works with schools. She showed a video of Francis Street CBS primary school taking part in a hydroponics experiment called window-farming.

The lads are earnest and interested in growing their own food, even though they “have to wait for ages”. You are obviously not going to change the world through one window-farming experiment, but the way the boys of Asian, African and Irish origin work together is very inspiring.

There are opportunities as well as challenges in immigration to our country. Our past should help us empathise. After all, we were once the ones no one wanted.

1 Who are Ireland’s 17 billionaires?
2 Gardaí investigating Keane Mulready-Woods murder arrest man
3 Why has the pension age question suddenly become an election issue?
4 Man (23) doused in petrol and set on fire in Cork attack
5 Dr Eva’s Great Escape is everything Dermot Bannon’s recent show was not
Real news has value SUBSCRIBE