Breda O’Brien: Irish need to be as good with the dying as with death 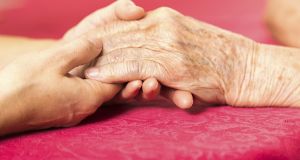 When it works well, palliative care is not just about pain relief, but a vision of living well until you die.

Recently, I read Séamus O’Mahony’s occasionally grumpy, sometimes bleakly humorous and always thought-provoking book, The Way We Die Now. O’Mahony, a consultant physician in Cork University Hospital, is suspicious of the idea of the “good death”. It is not that he does not believe that it is possible. He provides several examples in his book. He is just suspicious of the idea that anyone can have a good death to order, much less that anyone can truly exert control over death. Life and death are just too messy for that.

He believes death has been overmedicalised. The rituals and beliefs that once “tamed” death have been replaced with frantic attempts to avoid it at all costs, often stemming from the patient’s family. O’Mahony’s verdict on the Irish is that we are “so good with the dead, not so good around the dying”.

As a doctor, he was delighted when Marie Fleming was denied the right to assisted suicide. In 30 years as a doctor, he has never met anyone that he felt he needed to assist with suicide. He points out that the media hailed her as “brave, courageous, clear-minded and an inspiration”.

However, as O’Mahony says, “the law is also there to protect the cowardly, the stupid, the unloved and the uninspiring”. In other words, Fleming’s dream of controlling death would have had major negative consequences for many vulnerable, sick, old people and the whole way in which medicine is practised.

O’Mahony says that her “suffering was conflated with moral infallibility: it became unacceptable to disagree with someone who was the victim of a progressive and incurable disease”. It is essential that people be sensitive both to those who suffer from such illnesses and those who are bereaved. But I believe that we have gone much, much further. The authority of personal experience now trumps everything else, even when Tom Curran, Fleming’s partner, says that as Europe co-ordinator for the assisted suicide advocacy group Exit International, he has helped about 200 people plan their deaths. To my knowledge, Curran has no medical or psychiatric training.

Fleming said hospice care was not for her, but shamefully, for many people, it is not even a real choice because the provision of it is so patchy.

Furthermore, Curran has spoken of the difficulty of getting palliative care for his partner, and how it should be available much earlier for people with life-limiting conditions, a stance shared by palliative care advocates.

Palliative care is defined by the World Health Organisation as “an approach that improves the quality of life of patients and their families facing the problems associated with life-threatening illness, through the prevention and relief of suffering by means of early identification and impeccable assessment and treatment of pain and other problems, physical, psychosocial and spiritual”. When it works well, palliative care is not just about pain relief, but a vision of living well until you die.

A recent survey, Let’s Talk About, co-ordinated by the All Ireland Institute of Hospice and Palliative Care, found that people who accessed palliative care found it to be far from perfect. But the report also documents superb examples of best practice. Anne Molloy, in a thematic analysis of the survey, writes how striking it is to read stories where words not generally associated with death are used to describe the last few days of a loved one’s life; words such as “wonderful”, “graceful” and “happy”. Palliative care at its best makes a huge difference.

At the end of life, unbearable suffering and assisted suicide are far from the only options. However, making palliative care a viable option for everyone who needs it is not just a matter of funding, or training for medical personnel. It will also require Irish people to overcome taboos about discussing death, and to become as good with the dying as they are with the dead.

2 Michael McDowell: Time to wake up and smell the coffee over Sinn Féin

4 Netflix: 10 of the best new shows and films to watch in December