Boston for Beginners – An Irishman’s Diary about Kurt Vonnegut, the Charles Regatta, and JFK 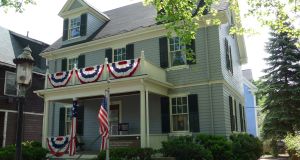 Number 83 Beals Street, where JFK spent his toddlerhood, is a surprisingly modest property

Arriving in Boston for a few days recently, I bought a copy of Kurt Vonnegut’s Slaughterhouse Five. Although born in Indiana, Vonnegut was a sort-of Bostonian, having spent many years on Cape Cod. I thought his anti-war classic would be a good book to read while there.

But there were too many distractions to do much reading. For one thing, I discovered that my visit coincided with the annual Head of the Charles Regatta, an extraordinary event that takes over Boston for two days.

In participation levels, it’s like the Dublin City marathon on water, albeit the course is only three miles long. More than 10,000 compete, in 2,000 boats, although not all at the same time, obviously.

There are multiple races, for all ages and abilities. So as its co-founder D’Arcy MacMahon has explained, the event attracts everyone from “Olympic champions” to “complete neophytes”.

Part of its appear is that, since boats start individually, 15 seconds apart, the incompetent are spared embarrassment. Thousands watch from the banks and bridges but, as MacMahon added, “nobody can tell whether you’re way behind”.

They can tell if you capsize your boat, of course. And this had happened to four women I eavesdropped on in a restaurant later. But they clearly hadn’t been embarrassed – they just righted the boat and carried on. Nor were they neophytes. As I also learned from their conversation, they were all in their 60s.

In another happy coincidence, I discovered my hotel was just around the corner from the house where JFK was born, a century ago last May. Number 83 Beals Street is a surprisingly modest property. But then, Joe Kennedy snr was only passing through. Having bought it in 1914, he moved his fast-expanding family out in 1920. So JFK spent only toddlerhood there, although in an eerie cardboard cut-out at the back door, he is portrayed at his peak. He looks like a man who could compete at the elite end of the regatta, although he never lived to see that event (it was founded in 1965), and in fact preferred swimming to rowing.

He did famously capsize a boat once, or rather had it capsized for him by the Japanese. But that was the catalyst for an act of extraordinary heroism by which he saved most of his crew.

Among other things, he swam 3.5 miles – longer than the regatta course – in dangerous waters, while towing a badly burnt comrade (another McMahon) via a life-jacket belt gripped between his teeth. It won him medals, inspired a movie, and was a key part of the glamour that propelled Kennedy to the presidency.

Those who volunteered to work on his campaign, according to a letter in Boston’s JFK Museum, included Kurt Vonnegut. Vonnegut was on Cape Cod by then, a struggling novelist and failing car-dealer (for Saab). His 1960 letter to Kennedy HQ nevertheless boasts: “On occasion, I write pretty well.”

The campaign does not appear to have been tempted. Kennedy was dead and Vonnegut had endured another decade of struggles before his career finally took off with Slaughterhouse Five, which was based on his own war-time experiences as a prisoner during the fire-bombing of Dresden.

As he explains in the opening chapter, which I got around to reading only on the flight home, he had spent years trying to write about the horror, but unable to recall anything worthwhile.

So hoping to jog his memory, in 1964, he paid a visit to an old wartime buddy, Bernard O’Hare, bringing a bottle of “Irish whiskey” to aid the conversation. But when he got there, he discovered O’Hare had given up drink, and that O’Hare’s wife was quietly seething with anger about something.

That something turned out to be her presumption that Vonnegut was planning a book that would romanticise war. He and her husband had been “babies” in Germany, she fumed. But Vonnegut would now pretend otherwise, and his book would later become a film starring “Frank Sinatra and John Wayne or some of those other glamorous, war-loving, dirty old men”. In time it would inspire more wars, also fought by babies, including her own.

So Vonnegut assured her it wouldn’t be that kind of book. And it wasn’t. When it came out in 1969, “Mary O’Hare” was one of two people (the other a German soldier) to whom it was dedicated. And it was an immediate critical and commercial success, read eagerly by a public weary of the Vietnam War, the American contribution to which had begun in earnest under JFK.