Bard news – An Irishman’s Diary about Shakespeare, the anti-Stratford movement, and woollen bagpipes 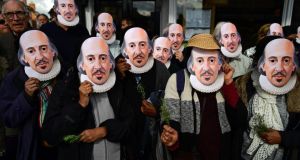 Members of the public prepare for a parade marking the 400 years since the death of William Shakespeare, in Stratford-upon-Avon. Photograph: Leon Neal/AFP/Getty Images

At the risk of offending my more erudite readers, I dare say most of you will be unfamiliar with the work of Francis Beaumont. He was, nevertheless, a well-known writer of his time and place – Elizabethan England. And like a vastly better-known contemporary, he also died 400 years ago, in spring, whereupon he was fast-tracked into Poet’s Corner at Westminster Abbey.

I was reminded of his former existence only last weekend when he was exhumed – in the figurative sense – as part of the everlasting debate about whether the man called Shakespeare wrote the plays attributed to Shakespeare.

No, Beaumont is not one of the 80 or so alternative candidates advanced by the “anti-Stratfordians”. But they do point out that his death, in March 1616, provoked “an outpouring of eulogies”, as well as the VIP burial. Whereas, when the man now celebrated as the Bard of Avon expired in April, “his fellow actors, and the playwrights with whom he supposedly collaborated, all remained silent”. Perhaps they were speechless with grief. Or maybe, suggest the doubters, their lack of recorded reaction is in keeping with the general absence of hard evidence – manuscripts, letters, references in his will, etc – that the Stratford-born actor ever wrote anything.

Like Irish republicans, anti-Stratfordians marked the major anniversary just past by rededicating themselves to a proclamation with signatures attached. In their case it was the “declaration of reasonable doubt”, a 2007 document which aimed by this year to make scepticism about the authorship issue acceptable in academic circles.

The Shakespeare Authorship Coalition has since claimed 3,000-plus signatories, including those of US supreme court justices and a number of former Hamlets.  But when I last mentioned the subject, in January, I suggested that the SAC might have to concede defeat on the 2016 deadline. Instead of which, last weekend, showing a degree of certainty rare among doubters, they claimed “complete vindication” for their campaign. In a series of 400th anniversary events, they also unveiled what they see as yet another hole in the orthodoxy, via Alexander Waugh, grandson of Evelyn and a leader of the anti-Stratford camp.

It concerned Ben Jonson’s much-quoted tribute to the “Sweet Swan of Avon”, published in 1623, not quite in time for the funeral, but soon enough afterwards to be an impressive argument for Shakespeare’s reputation. Except that, according to Waugh, Jonson’s reference was not to the Avon that flows through Stratford.  On the contrary, it was to a stretch of the Thames that runs past Hampton Court Palace, west of London, where the name “Avon” (a Celtic cousin of “abhainn”) was also applied to the river, and where many plays were performed.

I suspect the authorship issue will not be fully cleared up in time for the 500th anniversary. In the meantime, the 400th edition reminded me of a smaller, but also entertaining, controversy involving Shakespeare – the one that arose from his apparent reference, in The Merchant of Venice, to a “woollen bagpipe”.

Yes, in Act VI of that play, explaining his demand for a pound of flesh, Shylock refers to such an instrument, which has been the subject of conjecture ever since. Theories have included the possibility that it was a mere misprint, for “wooden”, or maybe “swollen”, both of which have a certain logic. And if it was meant to be “swollen”, went another argument, the rewrite might have been deliberate bowdlerisation, masking a typically Shakespearean sexual reference. There was also a school of thought that “woollen” was a simple description of the instrument’s bag (although wool would hardly be the best material for keeping wind in). But then there was yet another possibility, particularly popular this side of the Irish Sea. Could it be that Shakespeare was taking a phonetic stab at “uilleann” (from the Irish “elbow”) pipes? If so, it would backdate the known history of the instrument by at least a century, if not two. But since the origins of uilleann pipes are in any case obscure, it seemed plausible that the omniscient Shakespeare might have been first to write about them. And in traditional music circles, the older things are the better. So the “attractive error”, as Nicholas Carolan called it, took off.

Carolan attempted to scotch the legend in an scholarly essay as long ago as 1981. But as he said himself, it had been “converted into fact” in 1903, by the musicologist and historian WH Grattan Flood.  Converting it back is proving more of a challenge. I heard the myth – alive and well – as recently as Sunday.

1 Why Sinn Féin will not call the State by its name
2 Jury finds Harvey Weinstein guilty of sexual assault, rape
3 Bank leaked my loan request to family who tried to rip me off
4 Maureen Dowd: For the White House parasite, all restraint has gone
5 Coronavirus: Irish citizens advised not to travel to Italy’s affected areas
Real news has value SUBSCRIBE