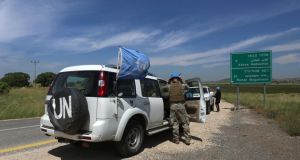 ‘Ireland’s recent courageous decision to deploy peacekeepers to the UN Disengagement Observer Force in the Golan Heights (UNDOF) to help address the worsening crisis in Syria was a strong testament to its commitment to the United Nations.’ Above, vehicles of the United Nations Disengagement Observer Force are seen near the border with Syria in the Israeli-occupied sector of the Golan Heights, on May 4th, 2015. Photograph: JALAA MAREY/AFP/Getty Images

It is now 55 years since Irish troops left Kickham Barracks, Tipperary, to serve in the United Nations peacekeeping mission in Congo. On Sunday, it will be an honour to accept the Tipperary International Peace Award and inspect a guard of honour made up of many of those veterans and others, who dedicated their lives to bringing peace and stability to some of the most troubled parts of the world.

The outstanding leadership and courage shown by Irish men and women, whether half a century ago in Africa or today in the strife-ridden Middle East, is an example we need now more than ever. Ireland’s recent courageous decision to deploy peacekeepers to the UN Disengagement Observer Force in the Golan Heights (UNDOF) to help address the worsening crisis in Syria was a strong testament to its commitment to the United Nations.

So too is the decision to resettle vulnerable refugees from the region at a time when so many desperate people are taking the perilous journey across the Mediterranean Sea. I know that Ireland, given its own history, understands all too well the issue of migration and emigration.

Ireland is a good friend of the United Nations, and makes important contributions across the international agenda. Beyond its stalwart support of United Nations peacekeeping, Ireland has been a force for disarmament, development and humanitarian action. Famine in the 19th century has made Ireland a champion of anti-hunger efforts in the 21st century. The Belfast Agreement has inspired people in troubled countries across the world to think that they, too, can turn their backs on conflict – and witness healing handshakes such as the one earlier this week between Prince Charles and Gerry Adams. For these reasons and more, in a year in which the United Nations marks its 70th anniversary, I congratulate Ireland on its 60 years of membership in the world Organisation.

This anniversary year is one in which the world faces big decisions about our future path. In September at UN Headquarters in New York, we have an opportunity to adopt a new development agenda that can help make major inroads against poverty and inequality. In Paris in December, we have a chance to reach a universal, meaningful agreement that will help avoid the catastrophic effects of climate change and instead galvanize the transition to a low-carbon future. In July in Addis Ababa, we can agree on the financial framework that will enable us to attain these objectives, bring positive change into the lives of the world’s most vulnerable people, and set the entire world on a more prosperous, sustainable and equitable course.

Ireland is deeply engaged in seizing these opportunities. The Emerald Isle has been a leader in greening its economy. The country’s former president, Mary Robinson, is one of my climate change envoys and is spearheading efforts to address the issue. Peter Sutherland, a former Irish Attorney General now serving as my Special Representative for Migration, has been a key voice in the world’s efforts to address this increasingly important issue.

And as a co-facilitator of the negotiating process, Ireland has helped lead international discussions to shape the proposed sustainable development goals, which firmly place poverty eradication at the centre, much as Ireland’s official development aid policy One World, One Future has. Ireland continues to show a strong commitment to provide Official Development Assistance. Now that the country has emerged from its own economic and financial crisis, I will look to the Irish people to continue lending critical support to lift people out of poverty, end hunger, empower women and girls and respond to humanitarian emergencies.

These may seem like daunting challenges. But Ireland’s history with the United Nations shows a country that does not shy away from risk or difficulty. As we celebrate the 70th anniversary of the United Nations and look back at our achievements and setbacks, we can look to future with some confidence knowing that the people of Ireland are so strongly committed to upholding the Organisation’s values of peace and security, development and human rights in every corner of the world.

Ban Ki-moon is Secretary-General of the United Nations

1 Cork shooting tragedy: Postmortems to be carried out as community shocked by deaths in ‘well liked family’
2 Ciara Kelly: I was pregnant, unmarried, a junior doctor and I got old-school comments
3 Third person arrested in education board corruption investigation
4 ‘Shellshocked’: Outrage in Australia after women on flight strip-searched in Qatar
5 Son (23) who died in suspected Cork murder-suicide was due to graduate
Real news has value SUBSCRIBE