On the trail of the real Donal Davoren 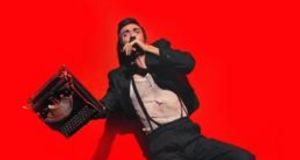 Mark O’Halloran as Donal Davoren in ‘The Shadow of a Gunman’ which opens at the Abbey Theatre on Friday, June 12th.

A production of The Shadow of a Gunman in the 1950s initiated a correspondence between Dublin woman Rose Woods and the ageing Sean O’Casey, then living in Devon. Family legend has it that Rose was indignant that the portrayal of poet-poltroon Donal Davoren, the “shadow” of the play, was a slur on the character of her long-deceased brother, also Donal Davoren.

Rose must have softened her tone because the author sent a cordial handwritten reply, informing her that he had met her brother several times in the early 1920s – and had asked permission to use his name for the main character in the play he was writing at the time.

O’Casey’s vivid recollection of the real Donal Davoren is marked by his anger at the conditions of the Dublin poor. Davoren had called to O’Casey’s North Circular Road tenement house seeking to enlist the struggling playwright in his insurance society.

O’Casey continues: “I do not hold with privately-owned insurance societies, but joined his out of sympathy with a lad struggling for a living within a fight against the scourge of consumption.”

Rose’s letter informed him of her brother’s death. O’Casey comments: “So he died in 1927. I’ve seen many in Dublin go down with tuberculosis, so many, so many, because of the rotten life they had to live.”

O’Casey then turns to fonder memories, recalling Donal as “an intelligent lad” who was a supporter of de Valera rather than Cosgrave.

In his sketch notes for the Shadow (set during the War of Independence), O’Casey describes Donal Davoren as caught in “an eternal war between weakness and strength”. Davoren is dreamy and idealistic and spends his time struggling to compose songs and poems whose gushing lyricism is a parody of O’Casey’s own lapses into rhapsodic excess. Davoren believes in “the redemption of all things by beauty everlasting”.

The tenement dwellers are depicted as living a miserable and cramped existence with the young Davoren in particular sensing the imminence of death. Though not explicitly named in the text, the scourge of tuberculosis hovers over his life.

Into this maelstrom of poverty and violence steps Davoren’s nemesis Minnie Powell, a young woman with “a force and assurance beyond her years” and beyond the ken of most of her neighbours.

Minnie is full of fervour for the revolutionary gunmen and, through a series of misunderstandings, comes to believe Donal Davoren is deeply involved. He is smitten and flattered by the allure he has suddenly garnered in her eyes; he does nothing to disabuse her of her illusions.

Davoren’s complicity in Minnie’s fancy leads inexorably to her death and his lamentation: “Oh, Donal Davoren, shame is your portion now that the silver chord is loosened and the golden bowl be broken.”

It is easy to sympathise with Rose Woods getting upset at a character strongly resembling her late brother (known in the family as “a bit of a writer”) and bearing his name being shown up as a vainglorious coward despite having many noble and refined sentiments.

It is clear that she was more than happy with O’Casey’s respectful portrayal of the reality of her brother’s character and how he had asked permission for the use of the name. An exchange of Christmas cards continued for several years, only terminating with a sad typewritten note from O’Casey’s son Breon in January 1957 apologising for his father not writing as he was upset by the death of his other son, Niall, a few months previously.

The original letter (in my possession) from O’Casey to Rose Woods concludes on a playful note: “By the way, Rose, he [de Valera] didn’t succeed in teaching you Irish. Your picture card is Italian; your verse-card is pure London. Mo náire thú.”

There is a strand of continuity in the story. Rose Woods was the mother of my late wife, Brighid. Our son Davoren Hanna, poet and visionary about disability, was named in honour of the Davoren heritage of her family, although I think it was the connection with the Annals of the Fours Masters that she had most in mind rather than the idealistic Donal Davoren walking the streets of Dublin selling insurance to ward off the ravages of consumption.