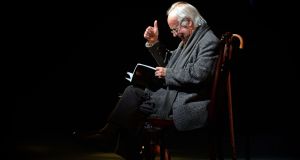 Poet Brendan Kennelly on stage at the Abbey Theatre, at an event to celebrate his 80th birthday. Photograph: Eric Luke/The Irish Times

Among the songs at Brendan Kennelly’s 80th birthday celebration on Sunday was an old one about Molly Malone. No, not that one.

This Molly Malone was from Kerry, north Kerry, “by the mouth of the Shannon”. And the song expresses its narrator’s wish to return from exile and set up home with her, “on the Kerry coast”.

Or “on the Kerry Kerry coast” as the chorus puts it either for metrical purposes, or because, like New York it’s so good they named it twice.

I have no doubt that there are Kerry imperialists who pretend this is the only song about Molly Malone they know. And I suspect it’s not a coincidence that it comes from the same corner of the kingdom that produced The Cliffs of Dooneen.

Like many people, I used to assume Dooneen was a local name for the area better known as the Cliffs of Moher.

After all, if you were writing a cliff-themed song based in Ireland’s southwest, you would hardly make it about anything other than those ninth wonders of the world near Lahinch. But no, like the real Molly Malone, Dooneen is in Kerry. And the nearest the song gets to acknowledging competition is in boasting that its cliffs are so high you can see Clare from them.

Since when, restored to health, he has also been restored to Ballylongford where he is now a born-again Kerryman.

Sunday was a homecoming in reverse, his first return to Dublin since. So a packed Abbey Theatre contained plenty of local admirers, even if he seemed to have brought half of Listowel with him.

Those paying tribute ranged from President Michael D Higgins to a former prisoner, Mannix Flynn. Flynn has become many other things in adulthood but I mention his youthful incarceration only because, of several speakers who attested to life-changing experiences via the guest of honour, his story was the most impressive.

Kennelly, he said, “was the first Kerryman I ever met that wasn’t a guard”.

Formal tributes aside, the event was also a concert, with performers including Mary Black, Lisa Lambe and the last-surviving Dubliner (the band, not the ethnic minority), John Sheahan. As befits the old bardic tradition of handing on torches, the bill also made room for an extraordinary piece of performance poetry from a young Leitrim man, Stephen Murphy, about depression.

I haven’t attended many poetry readings that I could honestly claim electrified the room but the end of Murphy’s performance was greeted with an “Oh my God!” from a woman beside me, and several other involuntary exclamations from an audience that stood to applaud. Well might the President, speaking later, draw comparisons with Allen Ginsberg’s Howl.

The Rose Of Tralee,

The sun is not setting on Kennelly either. The keynote of his own appearance on stage was his reading of Begin, a poem in the tradition of those his hero Patrick Kavanagh wrote, when himself convalescing, on Dublin’s Grand Canal.

If any closure is necessary in Kennelly’s story, it might relate to a memory he shared about his former involvement in something more serious than mere death, Kerry football. He was a fine player once, by all accounts. Unfortunately, he is still immortalised for some by an incident at the end of the 1954 All-Ireland minor final, versus Dublin.

Kerry were two points up when Kennelly conceded a free from which Dublin’s Vinnie Bell contrived a winning goal. And by the poet’s sad telling, Vinnie Bell has tolled for him ever since, most recently last year when a renewed old acquaintance dismissed the glories of six decades with a query: “Are you the little fella that losht the All-Ireland for us?”

They have elephantine memories in the Kingdom. But maybe, as a late birthday present, the GAA board would consider an official pardon.

1 Woman stranded in Ireland due to pandemic has ‘miracle baby’
2 Saving Tim Robinson’s Roundstone home, his last gift to the Irish nation
3 Behaviour is best Covid-19 vaccine available
4 Breathe easy to maximise your running experience
5 Matthew McConaughey: ‘I wouldn’t give back one ass-whupping for the values that are ingrained in me’
Real news has value SUBSCRIBE