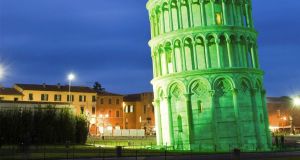 It’s that time of year again when we colonise the world’s landmarks with our national colour, spreading green around the globe in a show of zeal that followers of the prophet Muhammad – whose banner was of the same hue – could hardly match.

And I’m sure the point is lost on many locals who gaze at the statue of Christ of Corcovado, say, or the pyramids of Giza, and wonder at the odd choice of lighting this week. Even so, as an exercise in non-verbal branding, Ireland’s apparent monopoly on greenness is impressive.

Is there any other country so associated with a colour? “Red China” maybe? But’s that’s only a political nickname. New Zealand? If you’re a sports fan, you may think of it as black, although that is almost entirely due to one team, and several other colours compete to define the country. It is called the land of the “long white cloud”. Its symbol is the silver fern.

Most Muslim nations incorporate green in their flags, for the aforementioned reason. Under Gadafy, Libya dispensed with all other colours and went monochrome but even then, the country’s greenness didn’t extend beyond that. You thought of Libya (if you did at all) as being the colour of sand.

As for Greenland – so described, according to tradition, by Erik the Red – what can you say? The name was an attempt to attract settlers, apparently, but it can’t have fooled many. Now it’s just a monument to false advertising.

It’s not easy being green, as Kermit knew. But it’s not easy seeing it, either. Green was one of the last main colours to be described in national literatures because, it seems, many of the ancients just didn’t notice it.

Before he became British prime minister, William Gladstone was a classical scholar who specialised in Homer. He was struck by his odd treatment of colour: with the sea, for example, being described as “wine-looking”. In general, things Homeric tended to be either just dark or light. And for a while, Gladstone’s writings encouraged a theory that the Greeks had been colour-blind.

But since then, a similar pattern of evolving chromatic awareness has been identified throughout the ancient world, wherein the first colours mentioned are black and white, followed by red, then yellow and green, with blue last.

It wasn’t easy making green either, unless you were Mother Nature. In times when all colours came from the natural world, green fabrics had to be produced by double-dying, first with yellow and then blue. This may have been why the colour was once a symbol of wealth. It’s no coincidence that the Mona Lisa wore green.

Being too much trouble, it went out of fashion for a while. But like many colours, its fortunes were transformed in the 19th century, as synthetic dyes revolutionised the world’s palette. When the Empress Eugenie turned the heads of Paris in 1864, it was in a dress of triphenylmethane green, no less.

But the proliferation of greens only added to the trauma of Charles Stewart Parnell’s incarceration in Kilmainham. Notoriously superstitious, he dreaded the colour. So it was a cruel torture when many of his female admirers inundated him with gifts of knitwear, in 40 shades of patriotism.

Along with suggesting bad luck, occasionally, green is the colour of envy. By contrast, it’s also famously restful on the eyes, which is why TV studios have “green rooms” as recovery areas. For similar reasons, another artist, the intensely colour-sensitive Kandinsky, didn’t like it. It was beneficial to “exhausted men”, he thought, but soon became “tedious”.

Overall, however, green gets a good press. It is the colour of freshness and youth, if also of naivete. And in keeping with etymological parentage in the same root that gave us “grow”, it is shorthand for the ecological movement.

This might yet prove the real genius behind Ireland’s cornering of the global market in the colour. In an age of intensive farming, you can cross large parts of Europe now and not see animals in fields anywhere. Cows eating grass are increasingly an Irish spectacle. And that’s one of the boasts inherent in a two-word slogan under which our food exports are now being promoted throughout the world: “Origin Green”.